Prizes And Jackpot Game Waiting For You In Faerie Spells 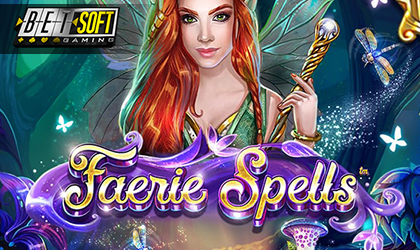 Fairies are truly enchanting creatures that are at the same time very mystical and intriguing. Stories about them always spark up our imagination, so it is always a good idea to create something that can drag us into their world.

This time, BetSoft took that chance and developed a slot called, Faerie Spells, that holds many alluring things.

Be Part Of Their World:

Who doesn’t want to mix up some potions, cast spells and other spectacular stuff? Here, in this 3x5 slot machine you will get a chance to precisely do that.

You will come across various spirits that make potions in the shadows, where no one can see them as well as some mushrooms that can potentially be very rewarding.

A Fairytale For Everyone:

This game isn’t just a typical slot machine, it represents a modern fairytale which anyone can enjoy and be a part of.

It showcases a world filled with treasures and wealth as well as bewitching characters that will certainly catch your attention.

Among them, you will meet faeries and pixie princesses that are accompanied by interesting guardians with green beards, enchanting trees and last, but not least – will o’ the wisps.

Do They Have A Queen?

Yes, they do and she looks breathtaking! It’s not a typical queen you can frequently come across. Namely, this one can invoke two sensational features:

During the first one, her aura forces toadstools to uncover the things they hide (features). It could either be multiples of your bet or at three of her characters activate the beneficial jackpot bonus game.

Do Your Best To Hit It!

Getting a jackpot is not something that comes easy, hence, you need to give your maximum to hit one.

Furthermore, this round is placed on an interesting playfield in the queen’s workshop. Each player has to grab something that looks like tubes filled with potion during either ten, fifteen or twenty-five casino spins!

Each time you manage to collect a drop of that potion, you will enhance your chances of getting one out of four jackpot recipes that queen makes. They are called – the Spells of Plenty, Wealth, Luxury and Riches.

Each time an icon is grabbed, it immediately vanishes from the reels and other special icons cascade down in a magical shower.

We mustn’t forget the sensational feature from Betsoft called, Buy-in, that users can pay to utilize receive the maximum number of casino spins as many as they want to get.