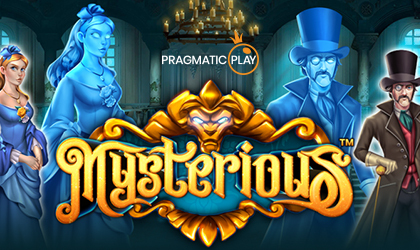 Pragmatic Play, a premier software provider in the iGaming industry, has announced the release of a brand-new slot game adventure that takes players to the other side.

Those who appreciate a solid ghost story will adore Mysterious and its aesthetics. With that said, this game brings awesome features as well, making it a complete experience.

Riches from the Other Side:

The developer has brought another awesome slot game to the market. This time around, they’ve taken the story down the spooky street. Players are presented with a grandiose theme that is all about ghosts, in a Victorian setting.

The entire experience is influenced by the architecture and the overall aesthetic of this era. It’s worth noting that the background is completely animated and represents a view down a street submerged in a thick fog. Up on the hill, in the distance, a manor appears.

As far as symbols go, the developer went with the card suite set for the lower-paying deck. All of the symbols are surrounded by detailed Victorian ornamental patterns etched into what appears to be steel.

The higher paying set includes various animals done in a similar fashion. Last but not the least, there’s the soundtrack that kicks the spooky into overdrive.

This slot runs on a 4x4 grid and a total of 4096 ways to win. This highly volatile release is packed with interesting special features such as the three wilds. Each wild is represented by one character of the game and includes the Lord, the Lady and the Baron.

Each of these brings…

…a unique set of benefits to players lucky enough to draw them on the reels. There’s also the Bonus Spin mode and the Locking Multiplier Bonus mode, both of which can greatly improve one’s chances for a massive win!

Melissa Summerfield, Chief Commercial Officer for the brand, said: “Mysterious takes players back to spookier times in a slot jam-packed full of Infectious Wilds, Mystery Symbols and a thrilling theme. The exciting gameplay, immersive soundtrack and stunning graphics are sure to take players to the edge of their seats in this highly engaging new title.”

Pragmatic Play is one of the premier software providers in the iGaming industry. This company is known for its high-quality releases and slots that pack impressive graphics as well as features. It also offers a number of advanced live casino table games, bingo and more.

Its range of products is focused on delivering the best possible entertainment to end-users. This is achieved with a high standard of quality as well as a broad complement of promotional tools and other back-office solutions.