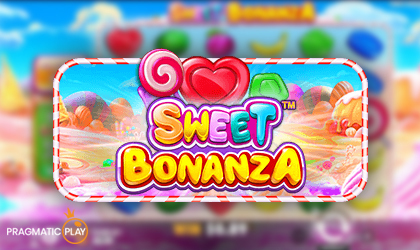 Pragmatic Play, one of the leading software developers in the world of iGaming, has released a brand-new slot title. Named Sweet Bonanza, this new addition to their ever-growing portfolio brings a few innovations on top of a solid base game. The new release also happens to be all about candies and sweets, making it a perfect game for those with a sweet tooth!

Much like most other titles from this software team, this one looks polished, well thought out and attractive at first glance. It has a decent player retention quality as well, all things considered.

Candy inspired themes rarely work out well. That is because they are trying to appeal to the player’s sweet tooth, all while being functional. This brand is arguably one of the few studios to nail both of these qualities to the fullest. The game features a theme full of all things candy! The background is semi-animated, thus giving the user a notion of depth. On the other hand, the frame is quite thin, which puts the colorful symbols at the center of the player’s attention at all times.

The effort put into the graphics is obvious. Designers at Pragmatic Play went all out on both the background and symbols. Everything looks high in detail as well as quality.

Engaging Base Game with an Extra Punch:

Attractive visuals are far from being the only thing this latest title has to offer. The software studio behind this release is fully aware that base game mechanics are what makes the game – that and special features. The game is modeled to follow that idea. The core experience it offers is smooth and fluid. Pragmatic went with a 6x5 grid and something they call ‘tumbling’ reels. Very similar to cascading reels, this feature takes out all winning symbols in one fell swoop.

Overall, this title promises to be a fairly volatile one. We don’t have info on the theoretical RTP, but it’s easy to tell that this online slot can easily swing both ways. This rings especially true since the game utilizes a ‘pays anywhere’ system.

“We are excited to unveil Sweet Bonanza, a high-volatility game which gives players an opportunity to load up on sugar and huge prizes.”

Summerfield isn’t hiding the fact that the company is relying on the tumbling feature to increase user acquisition as well as retention: “We’re certain that our innovative tumbling feature and tantalising gameplay will be a firm favourite with operators and players.”

As things are right now, this latest addition to their portfolio promises to join their all-time best-performing titles such as Wolf Gold and others.

The recent candy-inspired premiere is just one of the many releases from this software studio. They have also published 5 Lions Gold and The Dog House, all in rapid succession. With that in mind, it isn’t too farfetched to say that 2019 is going to be one of the best years for this company.