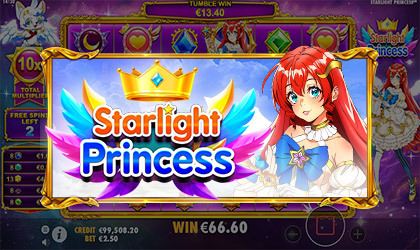 Pragmatic Play, a leading casino provider, has launched online slot Starlight Princess. The game seems to be very similar to its Gates of Olympus slot. However, this time a princess with long red hair, is the main character and she will bring luck to many players who try out the game!

There are 6 reels, 5 rows, and a maximum potential win of 5000x the bet. This game has an RTP of 96.50%. The minimum betting option is $0.2, while the maximum is $100. As for the bonus features, there are extra spins, multipliers, cascading wins, a bonus bet option, and scatter symbols.

Starlight Princess will join the recent successful launches from the provider such as Rise of Giza PowerNudge, Chili Heat Megaways, Bigger Bass Bonanza, and more great titles developed by this popular casino brand!

Yossi Barzely, Pragmatic's Chief Business Development Officer, said: “Heading in a new direction with an anime-inspired theme, we’ve brought our celebrated mechanics into unchartered territory in a bid to appeal to our global spread of players. With alluring gameplay, an elegantly mapped set of reels and a ‘Pay Anywhere’ mechanic that adds a whole new dynamic to the game, we’re positive that our new release will resonate strongly with our players.”

Pragmatic Play was founded in 2013. and the company's products quickly reached many popular sites around the world. A significant part of its success was joining the popular provider of the Novomatic group in 2014, as well as providing access to its wallet through third-party operators such as Greentube. Although initially focused on the Asian market, in early 2015, it moved to the UK and opened its studios in London. The company offers over 300 slots with a variety of innovative themes, all compatible with HTML 5 technology. All games created by this provider are available on different platforms and devices, which means that its games can be played on different platforms such as Android devices, iOS, and Windows.