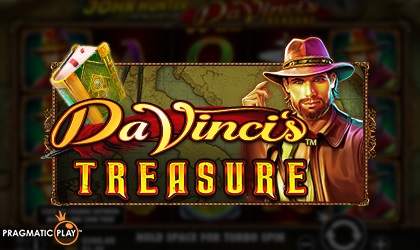 These Artistic Reels Can Be Very Fruitful Indeed:

Pragmatic Play, one of the fastest software providers in the online casino business is back, with another slot machine for you to try your luck at. Already boasting a vast catalogue of video slots with varying genres, themes and pay outs, the creative team has designed something a little different to what they have created before – and to be honest, we think you’re going to love it…

…Da Vinci’s Treasure is based on the renaissance master of fine arts – none other than the famous Leonardo Da Vinci, but instead of hunting down portraits, your quest will be to hunt down his treasure. Featuring 5 reels and 25 win lines, with bets starting at just 25p a spin, players can spin to win big cash on desktop, mobile and tablet devices. High rollers can splash the cash with the £125 maximum bet potential.

The reels of the game are situated on an old map, thankfully, you won’t need to start mapping out a route: you just need to adjust your bet and spin those reels. Symbols are in-keeping with the theme: crossbows, knapsacks, mystery books and of course, those card values from 9 to A. Other symbols can be found, along with Da Vinci himself and an explorer known as John Hunter – he’s the highest-paying base game symbol, with a multiplier of 32x being awarded for a five of a kind combination.

The bonus features are what make this game so exciting, but you’ll need to land the game scatter in three positions on the reels, to get your hands on one of the following;

Oh, did we forget to mention that there are some whopping big wins waiting to be won? Well, there’s a jackpot of as much as 48,000x your stake on offer, if you get lucky with those 60x multipliers attached to extra spins!