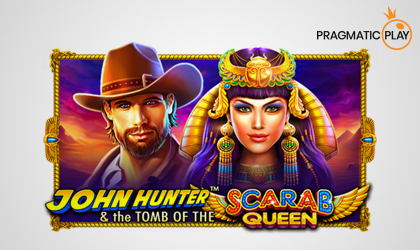 Pragmatic Play has just announced the release of a brand-new installment of the John Hunter series of slot games. Titled John Hunter and The Tomb Of The Scarab Queen, the new game brings…

… the continuation of the story, new adventures and highly attractive in-game features to the fans of this thrilling saga.

The John Hunter series from Pragmatic has been one of this company’s most successful thus far. Much like the character he was loosely based on, the series has managed to gain quite the following over the years. The latest installment of the game takes him to Egypt where he is setting out on an adventure to explore the tomb!

Fans of the game will find themselves in the golden deserts with pyramids lining up the horizon as the night settles over the land. With such a soothing background and an abundance of golden elements to the theme, this slot…

…absolutely nails the treasure-driven adventure vibe. Symbols feature the classic card royals as the lower-paying deck while the higher paying one is packed with various belongings of our main protagonist, such as his pistol and his satchel. There is also the symbol of Anubis, while the absolute highest paying one feature John Hunter himself.

The game runs on a 5x3 grid and 25 fixed paylines. The smooth base game experience is made complete with a set of simple yet attractive special features that add just the right amount of spice to the game.

Players will be able to potentially score massive wins with Collect symbols. There are five in total and each does something different. Benefits range from multipliers to other options depending on which the coin is drawn.

Yossi Barzely, Chief Business Development Officer at Pragmatic, offered his insight regarding the newly released title: “John Hunter & the Tomb of the Scarab Queen is a thrilling new addition to our John Hunter series, which is a staple of our portfolio. We are always looking to develop exciting content, and the John Hunter games give us a great platform to develop a fascinating story with a great character.”

The new title is available at all affiliated online casinos.

Pragmatic is a company with a long history of delivering some of the most competitive titles on the market. Their games bring high-quality graphics which are often hardwired to a compelling storyline. Such combinations are exactly what gave birth to the John Hunter series which has proven to be one of its most popular offerings.

Aside from games, this company also offers various content management solutions and other software aimed at enabling casino operators to have more control over their content. Ultimately, the goal of everything that the company is offering is to give players the best slot experience they can find out there.