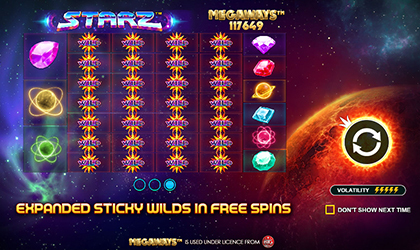 Pragmatic Play, one of the leading software providers in the iGaming industry, has announced the release of a brand-new Megaways slot game titled Starz Megaways.

Fans of this particular type of slot base game mechanic are in for a treat. The developer went with a fun theme and visuals that are giving the game a whole new dimension.

The supplier is one of those brands that simply knows how to make an engaging slot game. They’ve put together a theme that brings incredible immersion despite the action taking place in space.

The theme is something else. As the game loads up, players will find themselves traveling through space. The team behind the new title has found a way of creating immersion with simple and subtle animation.

Namely, the awesome background is static, but there’s a transparent animation of particles flying towards the player that gives the whole thing a sense of movement and depth.

Symbols in this game follow the overall theme. There are two tiers – the higher paying one and the lower-paying one.

…the higher-paying tier features gems. Overall, the game is a visual masterpiece, to say the least.

The game uses the now-famous Megaways core game mechanic. There are 6 reels and up to 7 rows depending on the spin.

One of the interesting things about this game…

…is the fact that it comes with a fairly limited selection of special features. The team understood that the Megaways mechanic on its own was enough to give players a solid experience.

With that said, the game comes…

…with an interesting Bonus Spin mode that can yield up to 15 bonus spins.

Melissa Summerfield, the brand’s Chief Commercial Officer, said: “We are delighted to launch our latest addition to our portfolio, Starz Megaways™. With a thrilling setting, detailed gameplay, and massive win potential, it is set to take players out of this world. Our partnership with Big Time Gaming has already born fruit with the launch of Great Rhino Megaways™ and we are delighted to continue the success with this new game.”

Pragmatic Play is a slots specialist that is known in the industry for high-quality titles. The company is among the most popular providers out there, working with a massive number of tier-one casino operators from all over.

The team behind the brand consists of talented professionals who understand how the market breathes and is capable of answering player’s needs on the go.