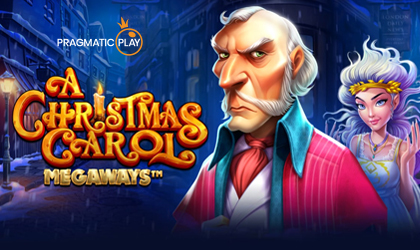 Pragmatic Play has announced new slot called, A Christmas Carol Megaways. The developer took inspiration from Dicken's story and old curmudgeon, Ebenezer Scrooge, who was visited on Christmas by the ghost of his former business partner. Scrooge eventually turns into a nicer and more tolerant person.

More on the Game:

This is a high-volatility game, which means that it is made for experienced and patient players who should bet wisely to survive in the long run. However, the RTP of 96.48% is above the average which is pretty good. Players can bet between $0.2 and $100 per spin, and this is a better betting range than many other megaways games. The maximum potential win is pretty high and it stands at 20,000 the bet.

Pragmatic Play’s Vice President Lena Yasir said: “Christmas lights and Christmas trees are starting to go up in households all over the world and we can’t wait for one of the most magical times of the year, so we’re inviting you to join in with Christmas Carol Megaways. With a widely recognisable and a potentially lucrative Bonus Round, our Christmas hit will have players hoping the magic of the season never ends.”

Pragmatic Play, the company formerly called Extreme Live Gaming, was founded in 2013 and the developer's products quickly spread to over 100 well-known gambling sites around the globe. An important part of their success was joining the Novomatic group a year later, as well as providing access to their portfolio through third-party operators such as Greentube.

The company provides more than 150 slots with different and innovative themes and all of them are backed up by HTML 5 technology. All the games from the provider are available on various platforms and different devices, which means that their games are adaptable for Android, iOS and Windows devices. The most popular titles are Hot Safari, Wild Sevens, Magic Crystals, The Catfather and Mighty Kong. Today they operate under licenses issued by the Malta Gambling Authority and the United Kingdom Gambling Commission.