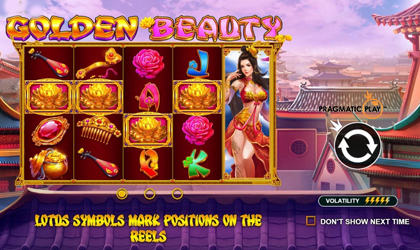 Pragmatic Play, one of the most popular slot game providers in the iGaming industry, has announced the release of a new slot game titled, Golden Beauty.

Set in ancient China, the game is all about...

...a mysterious Empress and her pots of Gold. With plenty of interesting features, this slot has everything it takes to become one of the more successful titles.

The ancient Chinese theme is one of the most popular ones in the slot game niche. However, companies such as Pragmatic are managing to find new and exciting ways of giving this popular theme a new spin. Its latest title takes place in a traditional Chinese town far in the past. It’s morning and the clear skies are letting the sun bathe the traditional Chinese rooftops in fresh sunlight.

Aesthetically speaking, the game is very immersive. The background isn’t static but instead packed with small but important animations. The clouds, although barely visible, are fully animated. The same goes for all kinds of lanterns strewn about on nearby rooftops.

Symbols are in line with the theme and are exactly what one would expect. Lower paying set of symbols is represented by stylized card royals that match the aesthetics of the game, while the higher-paying tier is all about cups of gold, other jewelry, and similar symbols. Scatter comes in the form of a massive Bonus symbol while the wild features the Empress herself.

At its core, the title features a 5x4 grid that runs on 75 paylines. Aside from solid base game mechanics, this slot also offers what the developer calls a Progressive feature. Once activated, players will start seeing lotus flowers drop on the reels.

With every 10th spin…

…these flower symbols will turn to wilds. On top of this feature, there is also the Bonus Spin mode, which brings 15 roaming wilds.

Melissa Summerfield, Chief Commercial Officer, said: “Golden Beauty is the latest in a long list of beautifully designed slots and added to our popular portfolio. The feedback we’ve received from players has been extremely positive, with many citing the gorgeous graphics and gamification as a reason for the enjoyable gameplay. We’re thrilled to offer it to operators and we’re sure Golden Beauty is going to be the perfect addition to any suite of games.”

Being one of the most innovative software providers on the market has allowed Pragmatic Play to become a highly popular brand in the business. With immersive slots released on the regular, this company has established a large following of fans who are eagerly anticipating the next release.

The supplier also offers a number of sophisticated back-office solutions for their B2B clients, that allows them to improve the quality of their service and much more.