Pragmatic Play Has Started the Stampede with Great Rhino Deluxe 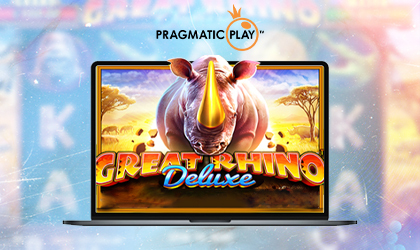 Pragmatic Play has added one more title to its Safari saga.

…Africa-inspired theme. Fans of the series are in for another episode of that familiar entertainment value as well as volatility we’ve seen in previous installments.

The provider is dropping another hot release for this summer. The new game takes players to the heart of Africa where these colossal beasts roam free.

Once the game loads up, players are…

…presented with a golden savanna that reaches as far as eyes can see out in the distance. Unlike it is the case in slots that have a similar theme, the background in this one is fully animated.

You can actually observe various animals…

…chomping on the grass out in the distance, while there are also a few ornaments stuck on the reels that move in the wind as well.

Symbols are just as one would imagine them. The brand went out of its way to create immersion by taking the usual card royals for the lower-paying tier and completely redesigning them. The result is a completely custom set of symbols that perfectly fit the theme. Higher paying tiers come in the form of various wild animals and other wildlife.

The 5x3 slot game runs on 20 fixed paylines. The developing team went with the more standard special features but brought them to a whole new level.

That translates to a…

…Super Respin feature that replaces every winning combo with a row of special symbols. Players who get 14 such symbols at the end of the special respin mode will trigger the Major Jackpot. Hitting 15 symbols leads to Grand Jackpot.

Melissa Summerfield, Chief Commercial Officer for the brand, said: “Great Rhino Deluxe is the newest addition to our growing series of titles under the Great Rhino umbrella. Taking a classic fan-favorite and adding innovative new features allows us to continue to grow an exciting franchise. We continue to refine our craft and endeavor to create immersive slot experiences for all of our titles and Great Rhino Deluxe is no exception. We look forward to seeing how it is received by our fans and operator partners alike.”

Pragmatic Play is one of the leading software providers that specialize in high-end slots. The company has a presence in just about every key regulated market across the world, supplying millions of players with entertainment.