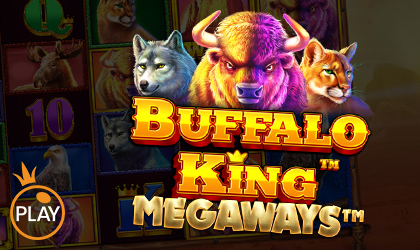 Pragmatic Play, an online casino provider, has the license to use the popular Megaways mechanic and has officially launched a title utilizing this engine. This time, it has launched Buffalo King Megaways with wildlife-themed characters. The wildlife of North America is an inspiration for many developers, especially because of great background images and symbols. Here players will see various symbols such as buffalo, eagles, mountains, moose, cougars, and wolves, as well as lower-paying classic royal card symbols.

The action takes place on 6 reels, 7 rows, and 117,549 active paylines. The maximum potential win is 5000x the bet and this is a high volatility game with an RTP of 96.52%. As for the bonus features, players will be looking for wild symbols, extra spins, multiplier wilds, and tumbling reels. As for the betting range, players can start with a minimum betting option of $0.2, while the maximum option is $125.

For the Megaways slot, the jackpot of 5000x the bet is not a huge payout, but this game can be considered a fair one, due to RTP, which is above the industry average, plus with the immersive graphics, players should definitely try this one!

Yossi Barzely, Pragmatic’s Chief Business Development Officer said: “Buffalo King Megaways™ is another addition to our thrilling collection of classic hits that we’ve turbo-charged with the Megaways™ brand. We’re always looking to bolster our product range with inventive titles and engaging themes, so we look forward to seeing how the new game is received by our audience.”

More on the Malta-Based Brand:

Pragmatic Play was founded in 2015 and offers a variety of online casino games such as slots, video poker, table games, scratch cards, keno, and live dealers. According to the company, it has created 282 slot machines equipped with the latest technology, allowing players to enjoy content on different devices such as mobile phones, desktops, and tablets. It has a head office in Malta, where it also operates under a Malta Gambling Authority license, and the brand is also licensed to provide content in the United Kingdom, Gibraltar, Romania, Curacao, and the Bahamas. This casino operator released a real masterpiece with Peaky Blinders in 2020 and among its other popular launches are Hot Safari slot machines, Wild Sevens, Magic Crystals, and more.