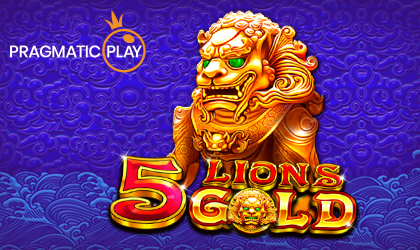 Pragmatic Play, an online casino provider, launched online slot 5 Lions Megaways. This title has a Chinese theme, in which the lion plays the leading role. The grid looks rich, filled with shiny golden colors, and the game is played on 7 reels, 6 rows, and 117,649 active paylines. Even with a large number of potential combinations, the maximum potential win is 5000x the bet. The RTP 96.50%. As for the bonus features, there are lion wilds, random multipliers, Yin Yang scatters, extra spins, and a tumbling reel engine. This game enables players to wager anywhere from $0.20 per spin up to $100.

This is the latest game to join the extensive Pragmatic slot portfolio and follows the recent successes such as Dragon Hot Hold and Spin and Buffalo King Megaways, as well as the other 220 slots from this respected casino brand!

Yossi Barzely, Pragmatic Play Chief Business Development Officer, commented: “5 Lions Megaways™ marks our latest sequel to include the Megaways™ brand and we’re very happy to release this hit. Featuring an exhilarating theme and the exciting Megaways™ gameplay, 5 Lions Megaways™ is a testament to the innovation that is currently driving the iGaming industry.”

Pragmatic Play, a brand formerly known as Extreme Live Gaming, was established in 2013 and its products have quickly spread across over 100 well-known gaming sites around the world. An important part of its success was joining the Novomatic group in 2014, as well as providing access to its portfolio through third-party operators such as Greentube. It was initially focused on the Asian market, and in early 2015, moved to the UK and opened offices in London. The brand offers over 300 casino games with a variety of innovative themes, all supported by HTML 5 technology. All of the provider's games are available across multiple platforms and devices, which means its games can be adapted to any market. The most popular games are Wild Sevens, Magic Crystals, Hot Safari, The Catfather, and Mighty Kong. Today, it operates under licenses issued by the Malta Gambling Authority and the United Kingdom Gambling Commission.

BGaming Adds to its Portfolio of Games Dragons Gold 100