Pragmatic Play Goes for a Drive with Street Racer Slot 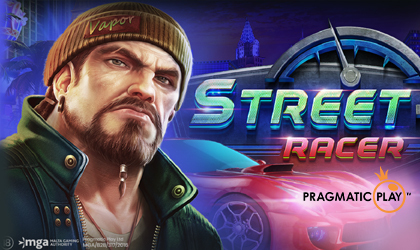 Pragmatic Play announces its latest release, which comes in the form of an exciting new slot game that is bringing the smell of burnt tires and gas to the reels.

Players are presented with a wild ride…

…packed with all kinds of cool features as well as a theme that is promising a decent level of immersion, especially if you’re a car fat!

The developer might be a tad bit late for the whole street racing trend set by Need for Speed and Fast and Furious, but in this case, it’s definitely better late than never!

…brings the unique aesthetic the aforementioned legendary titles introduced, and much more. The scene takes place in Las Vegas at night.

…the much closer spotlights bracket in a group of idling cars waiting to set off on a street race. As players spin the reels, they’ll get to enjoy the sight of many a quad exhaust, aggressive spoilers, and more!

Symbol design is simple but immersive. The lower-paying tier comes in the form of card suits while the higher-paying tier features a number of drivers.

There is also the Wild symbol that looks like a stopwatch, and along with the Scatter symbol, these two offer decent contrast to the rest of the aesthetic.

The 5x4 slot game runs on 40 fixed paylines. The game does come with several special features, but these are not what you’d expect. There’s the bonus spin mode that not only offers bonus spins but also a chance to level up each driver. All of the drivers come with up to 4 levels of progression where their worth improves with each level.

Melissa Summerfield, Chief Commercial Officer for the brand, said: “Street Racer is a dynamic, thrilling new addition to our slot portfolio. With a high-octane theme and massive prizes to be won, its action will keep players on the edge of their seats. Our development roadmap is focused on crafting industry-leading slots that drive the excitement of both players and operators. With Street Racer’s theme and immersive gameplay – this new slot would be a great way to rev-up any operator’s portfolio.”

Pragmatic is one of the leading software providers in the iGaming industry. The company is known for its high-quality content as well as legendary slot games which are still among the favorites in several key regulated markets.

Aside from quality games, this brand also offers a whole range of tools meant to give operators much more control over their content.