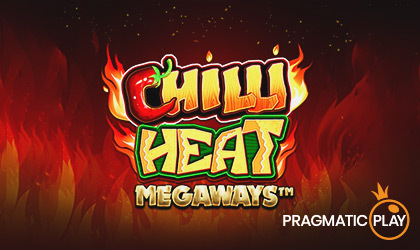 Pragmatic Play’s Chilli Heat was massively popular among players when it was launched about two years ago, and now it has released Chilli Heat Megaways. As for design, there have been some improvements, but developers kept the famous Mariachi and his cute dog. The soundtrack sounds more or less the same and that will probably set you up for tequila.

This title will join the premium Pragmatic slot library and the game comes after the recently released Lucky, Grace and Charm, and Fruit Party 2!

Yossi Barzely, Pragmatic Play Chief Business Development Officer, commented: “The first iteration of this title went down an absolute treat with our players, so it felt like a suitable time to give it a repurposing. We are thrilled with how the game’s festive theme, refined graphics and innovative mechanics combine to bring something entirely new to our portfolio and hope that it is well received by our audience.”

Pragmatic Play was established in 2013 and its products have been quickly distributed to over 100 popular gaming sites around the world. In 2014, the company took an important step and started a partnership with Novomatic group, which also allows third-party operators such as Greentube to access its gaming library. Initially, the company focused on the Asian market, and in early 2015, moved to the UK and opened its offices in London. Today, it offers over 200 online slots with innovative themes and features, and all games are compatible with a variety of devices and platforms. Its most popular games are Hot Safari, Wild Sevens, Mighty Kong, Magic Crystals, The Catfather. This company operates under licenses issued by the Malta Gambling Authority and the United Kingdom Gambling Commission and many other regulatory bodies across the world.