Pragmatic Goes Live with John Hunter and the Book of Tut 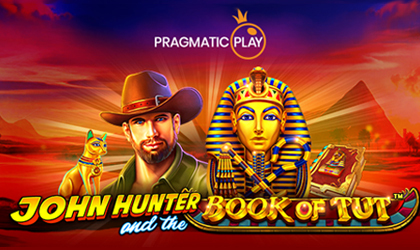 Pragmatic Play, one of the leading software providers in the iGaming industry, has announced that it is releasing a new installment of the John Hunger series of slots.

The new game is titled…

…John Hunter and the Book of Tut. Featuring a great theme as always, the game brings an exciting new adventure to the fans of the series.

Another Game, Another Adventure:

The whole John Hunter series of games is probably one of the most popular sagas in the in iGaming industry. The supplier has built a massive following solely on thanks to John Hunter and his adventures!

…brings our favorite character to Egypt where he’s on a quest to find the Book of Tut. The New game looks amazing, just like all of its predecessors.

The design team behind this release has decided to depict ancient Egypt using bright, golden…

…tones. The background depicts a river that separates the foreground desert from the background scenery with all kinds of structures in the distance. As far as animations go, players will notice the water flowing rapidly in the river as well as the clouds moving in the skies.

Symbol design is all about Egypt. Players will see the usual card royals in the lower-paying set, combined with golden scarabs, statues of cats, and more similar iconography in the higher-paying tier.

The is a 5x3 slot game runs on 10 fixed paylines. As far as special features go, the developer went light this time around.

The game offers a bonus spin mode that….

…triggers 10 bonus spins. The feature can be retriggered if three Book of Tut symbols are drawn during the spins. Once that happens, players are awarded another 10 spins.

Melissa Summerfield, Pragmatic chief commercial officer, said: “We are delighted to launch our latest John Hunter title, this time as he searches for King Tut’s treasure. The John Hunter series has been incredibly well received by fans across the globe and we are very excited to continue his adventures as he guides players to unimaginable riches.”

Pragmatic Play is a software provider specialized in building and publishing high-quality, immersive slot games for the iGaming market. The company is known for a number of games, including the whole John Hunter series that has become a massive hit in several key regulated markets. Pragmatic Play works with a wide range of tier one casino operators, thus bringing this brand to the center of highly competitive regions.

With a team of dedicated professionals at its helm, the supplier is looking forward to building new partnerships across the industry.