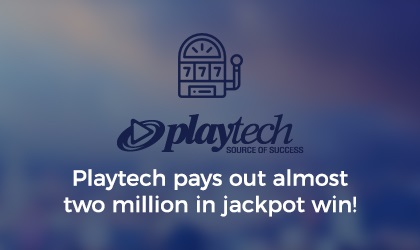 Playtech had quite a popular line of Marvel jackpots some years back, but these were discontinued quite suddenly as Disney (who now owns Marvel) decided gambling is not quite fit for their image.

A Deal with DC Comics:

The supplier then went on to make a deal with DC Comics, though these products never rose to the same level. However... it seems like they might be making somewhat of a comeback given that someone just scored almost 2 million USD win in their DC Super Heroes Grand progressive jackpot.

If you’ve been playing a lot of NetEnt or Microgaming jackpots lately it might be a good idea to take a look at what Playtech has come up with recently.

A New Line of Jackpots:

Though they are busy busting out one hit slot after another but have managed to come up with a new line of jackpots as well. Some of their non-super hero jackpots have reached new heights as well; Jackpot Giant stands at twelve million bucks and offers plenty of normal gameplay as well!

Age of Gods is perhaps one of the oldest game series from Playtech and they have managed to renew its lease on life with some interesting new innovations. You can now experience the game with a brand-new Poker and bingo version! Check out our list of Playtech casinos and either discover a whole new world of games or re-discover it!