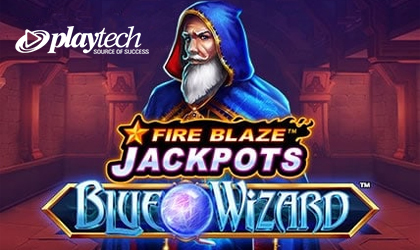 Playtech, one of the premier software providers in the iGaming industry, has announced the release of a new slot from the Fire Blaze series. Titled Blue Wizard, the new game…

…is promising to fill the shoes left behind by previous installments in the series. Fans of the series are in for a wild adventure.

The series was launched in April with the first installment, Sky Queen, which was welcomed with praise in most markets. It didn’t take long for Playtech to create and release the second installment…

…of this slot series under the name of Pharaoh’s Daughter.

This newest addition is promising to fill the shoes the previous two titles it follows. The game features…

…a mysterious, supernatural theme that draws the player in. All of the action takes place in a gloomy night scene that puts the player in front of the Wizard’s home. The developer’s attempts to add some suspense and mystery have completely paid off with this title.

Simple in design, the theme promises to draw players in and keep them engaged but not distracted. Playtech further continues the aesthetic simplicity with symbol design.

At its core, the title is a 5-reel, 30-payline game that allows the player to bet anywhere from 0.10 credits to 500 credits.

Aside from that, the game brings a number of special features that greatly improve the gameplay experience. There is the extra spin mode that brings win boosting multipliers and potential for a high win.

Additionally, the game gives players a chance to win big with Fire Blaze Hold and Respin features. This mode puts players in a position where they can potentially win one of the four Fire Blaze jackpots, with the Grand Jackpot being the largest prize. Worth 2000x the player’s original bet, the Grand Jackpot gives this game a massive potential.

Fans of the series can expect to experience two more installments to come this September. The supplier has announced that they will be releasing Tsai Shen’s Gift and Eternal Lady in that time frame. In addition to continuing the series, these two titles will bring unique win-boosting features and more.

Until then, the latest slot is currently available in all Playtech-affiliated online casinos.

Playtech is one of the world’s leading iGaming content providers. The company offers cutting-edge technologies and niche solutions to its customers. Founded in 1999, it has been…

…focused on developing the best-of-breed gaming solutions for their clients. Today, the company is enjoying a stellar reputation in the industry, being one of the few authorities when it comes to gaming content.

Over the years they have forged valuable partnerships with a number of top-tier operators around the globe. The company also holds licenses in a number of different regulated markets around the world.

With a 5,000 strong team of dedicated, talented individuals, it is continuing to grow and develop as a software provider.