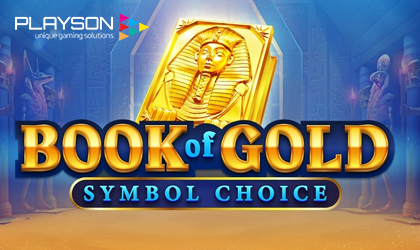 Playson, a premier software provider working in the iGaming industry, has announced the launch of a brand-new game. Titled Book of Gold: Symbol Choice, the game…

…takes players on a wild ride in the heart of Egypt. Fans of this particular theme will be greeted with a highly engaging slot that offers numerous interesting features.

The Golden Sands of Underground Egypt:

Playson’s latest game features a fairly simple take on the whole Egyptian theme. The team behind this release went with a balanced design that makes the game more than appealing to look at. They have struck the golden balance between achieving optimal user retention and keeping the whole experience fairly clean.

The scenery presented in the game takes place in what appears to be an ancient Egyptian temple. This is emphasized by the set of statues depicting Egyptian deities lining the walls on each side of the reels. The dark shadows of around the statues are contrasted by the golden shimmering sand that fills the room.

Once the tastefully animated details are added to this scenery, it isn’t hard to see why this slot promises to be one of the best Egyptian inspired slots this year. Finally, there is the mysterious soundtrack that completely ties everything together.

A Temple of Potential Riches:

The game itself runs on a standard 5x3 grid that utilizes 10 paylines. Symbols come in two different tiers – the lower-paying presented by card royals and higher-paying that features all kinds of symbols including the eye of Ra and representation of various deities.

The title comes with a very limited set of special features. The developer has decided to keep things rather tame with a bonus spin mode as well as a Special Expanding Symbol feature. The latter gives players the choice to select a symbol that would then fill up the whole reel.

Vsevolod Lapin, Head of Product for the brand, commented on the new release: “Book of Gold: Symbol Choice is a fun and immersive addition to our ever-expanding portfolio. With its cutting-edge mechanics and innovative features, this game takes players on an intrepid quest and we are sure it will appeal to users across the spectrum.”

Playson is one of the leading software developers operating in the iGaming industry. This company is specialized in creating and delivering high-end content to those who want cutting edge technologies at their disposal.

The company has offices in the UK, Spain, Malta, Italy, and Sweden, employing a large team of dedicated professionals.

Its current portfolio includes over 60 omnichannel games that include a number of crowd favorites. This company’s Timeless Fruit Slots are by far one of their most popular offerings. Due to their attention to details and knack for innovation, Playson has become a strong competitor and a sought after partner for numerous tier-one online casino operators from around the world.