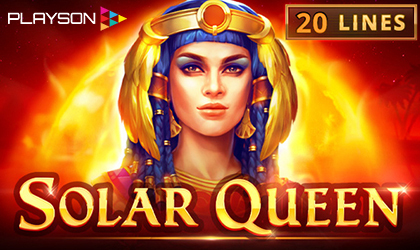 Playson has announced the release of a new slot game titled, Solar Queen. The game takes place in Ancient Egypt and takes the player on an awesome journey that brings potentially high rewards.

The studio behind this release has put together a complete package. Players will be enjoying an awesome theme paired with a good base game mechanic and more!

The Mysteries of the Solar Queen:

Ancient Egypt is becoming more and more popular among software providers in recent times. Everyone has their take on this period. However, Playson’s spin on ancient Egypt is by far one of the best. They went with a very mysterious design which compels the player to keep spinning those reels. With plenty of animated details, this game is definitely among the more attractive releases to hit the market this year.

The attractive theme is not the only thing that this studio has to offer. The entire thing is rooted in a very robust base game. The brand went with a 5x4 grid that utilizes 20 fixed paylines. Although it isn’t necessarily simple nor basic, the core game behind this title runs surprisingly smooth. Especially when it’s oftentimes complex graphics are taken into consideration.

As far as special features go, players will get to enjoy accumulating wild symbols as well as various winning multipliers. The sun symbols trigger the Flaming Frames mode which increases multipliers and brings new wild symbols at every 10th spin.

Vsevolod Lapin, Head of Product, stated the following regarding the release: “With its stunning graphics and progressive gameplay, we’re expecting Solar Queen to be a big hit with slot fans. This exciting new game is bound to bring out the adventurous side in players and will be a fantastic addition to our growing portfolio.”

The latest release is currently available as a demo on studio’s own website while it can also be found at affiliated casinos and operators.

Playson is one of the premier software providers in the iGaming industry, with more than a dozen legendary titles in their portfolio. The team behind this brand is comprised of dedicated and highly motivated professionals who have years of experience in the industry. Known for its cutting-edge solutions and content, this brand has become an authority in the iGaming niche.

Currently, they operate in various regulated markets such as Sweden, the UK, Spain, Malta, and Italy. With that said, Playson is always looking to expand its reach into new and untapped user pools. What really gives this brand an edge is the fact that they are always trying to bring their customers a better and more exciting experience compared to their competition.

So far, they have proven to be more than capable of handling the highly saturated and competitive markets. The fact that their games can be found in a large number of online casinos is a testament to that fact.