Playson Goes on an Adventure into the Jungles in Solar Temple 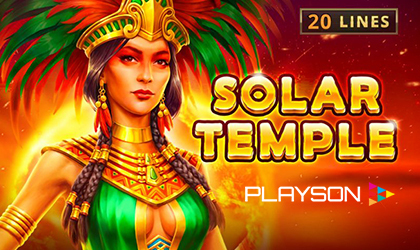 Playson is keeping up with a busy schedule when it comes to game releases for this year. Their latest addition to the slot game market comes in the form of Solar Temple – a brand-new adventure that takes players deep into the jungles of Central America. The developer is bringing attractive features as well as a great thing in this latest release.

Journey into the Jungle:

The supplier’s latest game goes deep into the jungle, taking players on a thrilling adventure. New release is a part of the Solar series of games, which include the previously released and highly successful Solar Queen.

Unlike that legendary Egyptian thriller, the new game is all about the secrets of Central American jungles. The theme they went with is highly immersive. Background is static in a sense that it’s not animated, but it changes depending on what’s happening on the reels. With that said, all backgrounds depict native temples and pyramids that are surrounded by thick jungle.

Even though the background is enticing, it is arguable that symbols are the most attractive part the game in terms of visuals.

…all about various animal symbols and deities. The highest paying symbol depicts a powerful queen and is expanding.

The 5x3 slot runs on 20 paylines and packs a fairly thrilling experience in the base game itself. On top of that, there are several special features that are available.

…a basic bonus spin mode triggered by scatters to start things off. Then there’s the Flaming Frames feature that is a modified bonus spin mode with sticky symbols and wilds that appear at the last spin.

During the base game, sun symbols which usually trigger the Flaming Frames feature can also bring various multipliers.

Vsevolod Lapin, Head of Product, at Playson had the following to say about latest installment: “Solar Temple is the eagerly anticipated follow-up to our hugely popular Solar Queen release – our most successful game to date. This new slot is packed full of stunning visuals and an immersive soundtrack that players come to expect with our games. Add to that the offer of big prizes hidden behind the temple walls, and this video slot will make an exciting addition to any operator’s stable of titles.”

Playson is arguably one of the largest software providers in the iGaming industry. The company is specialized in creating high quality slot games and other content as well as the necessary tools used by operators to improve end user’s experience. It is present in several highly contested regulated markets and is constantly working on expanding that presence.