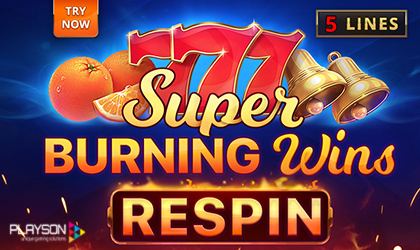 Playson, one of the premier software providers in the iGaming industry, has announced the release of a brand-new game. Titled Super Burning Wins Respin, the latest…

…title from this company brings great features paired with an engaging theme that is promising to attract players and keep them entertained.

The Reels on Fire:

The developer is one of those software providers that offer a wide range of quality made slots. However, this company is known for one series of slots in particular – the Timeless Fruit Slots!

The whole idea behind this series of slot titles was to create games that captured the feeling of old school slots, all while remaining pretty modern in terms of the core gameplay. The title in question is the latest addition to this series and has been one of the highly anticipated releases from the brand.

The game is a true spiritual successor of the previous installment of the series. Players are treated with simple yet convincing visuals that add entertainment value without being in the way. As usual, the symbols come in the form of fruits, bells, lucky sevens, and other classic icons.

At its very core lies a 3x3 grid that runs on 5 classic paylines. Fans of the traditional slot game will absolutely appreciate the nostalgia this release brings to the table. With that said, the supplier didn’t stop there.

It has added the Second Chance Respin mechanic that is activated when two reels are filled with the same Fruit symbols on a non-winning spin. Once that happens, players are granted a second chance respin.

Vsevolod Lapin, Head of Product at Playson, offered his take on the latest release: “Super Burning Wins: Respin is a thrilling new game which is sure to get fans of the classic Timeless Fruit Slots series hot under the collar! The Second Chance respin gives players another opportunity to enjoy massive wins, and we’re confident this new release game will fit perfectly into our cutting-edge portfolio.”

Playson is one of the major slot game developers in the iGaming industry. The company has been specializing in high-quality slots that feature HD graphics and otherwise impressive visuals. With that said, it is also always looking for ways to innovate the field and add new features through their releases. Speaking of which, the team behind this brand has been hard at work keeping up a busy release schedule that has so far yielded a number of legendary slots including the while timeless slot series.

This Malta-based provider has become a household name for top tier operators who insist on offering the best possible content at their establishments.

Aside from their gaming products, it also offers a number of efficient tools used to manage content as well as a variety of promotion tools.