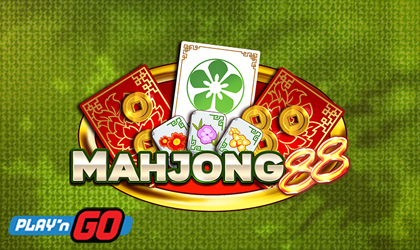 Mahjong 88 was once an extremely popular tile game, back in the 19th century. These days, it has received an upgraded version in the form of a slot machine for fans of this popular form of entertainment.

If you haven’t heard of this game before, then you will surely be intrigued by this upgraded version that Play’n GO has unleashed. It’s called, Mahjong 888, and it offers many opportunities for huge winnings!

What to expect? As we already stated, this video slot is packed with phenomenal features, as well as an outstanding design that will quickly drag players into the story.

These facts do not surprise anyone, if we take into consideration the fact that Play’n GO has always been famous for their creativity and uniqueness when it comes to appearance and design.

What Else Did They Prepare For Us?

Speaking of graphics and design, they have always focused on cultural representation in their games which, in the meantime, has become their signature. Those who are often playing their reel slots have probably noticed that in popular games, such as Viking Runecraft, Legacy of Egypt and in their latest slot, Contact.

That’s precisely the trait they’ve also been focusing on in this and those who know what we are talking about will immediately notice the same. The game is designed in their unique grid design and rather than spinning reels, the characters appear on Mah-jong tiles and once any tile is gone from the, board, a new one will emerge from underneath.

Amazing features contain Seasonal Wilds which are connected to a player’s run. During the game, users will slowly progress through all four seasons, meaning that each wild icon will do different things, depending on the season they experience, along with a special Season Bonus as the seasonal change happens.

Made To Please Everyone:

What we especially love about this video slot is the fact that it can be played by literally anyone. It was designed to match the aspirations and criteria of a broad range of users. That’s what makes this title so special and what will help it distinguish itself from other reel slots.

CEO Johan Tornqvist obviously shares our opinion, based on his statement:

“We’re very proud of what we have created here with Mahjong 88. Not only is it our very first 8×8 grid slot, but we carefully curated the design to add a rich authenticity to the Mah-jong based theme.

It’s no secret that we’re going to be putting out a high number of games this year, and this is just one example of the high quality and innovation that every single title will carry.”