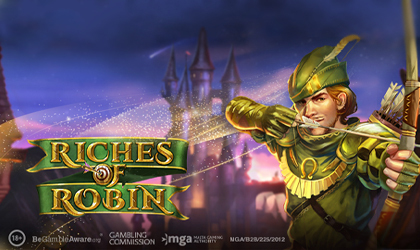 Play’n GO has announced the release of a new slot game titled Riches of Robin.

Designed around one of the most popular bandits in the world, it…

…brings a variety of features that bring potentially equal rewards as told in the legend itself. This isn’t the only Robin Hood-inspired title to hit the markets in 2020, but it’s promising to be among the best ones.

The Legend Is Back:

The developer is treating its fan base with another rendition of Robin Hood’s story. This time around, the whole crew is here and embarking on a new adventure! The background features a beautiful landscape that is slightly out of order for the legendary hero.

Namely, the entire action takes place inside a town. The player will see houses and shops on each side of the reels while the view in the distance hides a massive castle. The background scenery is subtly animated with vapor coming out of nearby windows and mist spreading around town.

Once a special feature is triggered, these houses become the set for Robin’s latest adventure as all of the main characters start appearing on the screen.

As far as symbols go, players can expect to see detailed card suits in the lower-paying deck while the higher paying deck is reserved for the main character and his crew.

The team behind this release has decided to go with the classic 5x3 reel grid that makes this slot game fairly familiar to most. There are 20 fixed paylines in total, which means that the base game is more than capable of bringing potentially rewarding wins.

Special features come in the form of classic bonus spins that are boosted with up to x5 multipliers. Then there’s the Heist Respins that bring money bags, and lastly, there’s the Quick Hit feature that has the potential to bring up to 1000x the original bet.

Johan Törnqvist, CEO of Play’n GO, had this to say: “We’re very excited about the game’s release. We’ve already seen players enjoy it immensely as an exclusive title, and now the rest of the market will get the chance to experience it as well. Our regular players will get the chance to experience two brand new concepts to our games, the reel individual reel strips and instant wins, as well as enjoying a brand new Play’n GO adventure!”

Play’n GO is one of the largest and most prominent software providers in the iGaming industry. Known for its highly immersive slots, the brand is all about delivering the ultimate entertainment through innovation and awesome graphics.

So far, this company has built a massive distribution network and is present in most key markets around the world.