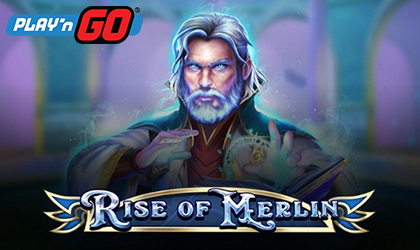 One of the most popular wizards of all time, Merlin, played (and still does) an important role in our childhood and now we are amazed by the fact that the creative and gifted developer, Play’n GO launched a game that is dedicated precisely to this lovely fella.

Get A Chance To Meet Him:

In this slot version, players will have the opportunity to meet young Merlin during his days as a maturing wizard when he wasn’t as popular as he is today. The slot is placed on a 5x3 grid and players can easily grab sensational wins if they manage to match at least three characters on any of the ten winning pay lines.

A Magical Orb that belongs to the wizard is very beneficial in this video slot. It represents both the scatter and wild characters and serves as a replacement for any other icon.

With its help, users will have greater opportunities for amazing wins and if not for that, it will at least be useful enough to help them activate the game’s casino spin feature. How do you activate this special round?

Easily. All you have to do is land at least three Magical Orbs across the reels and they will trigger eight additional spins, as well as pay out for the number of scatter characters on the reels.

More importantly, this feature can be re-activated if players successfully land at least three more scatter icons during slot spins, bestowing gamers with an additional eight spins! At the beginning of the spins round, one sign is chosen randomly with the potential to turn into a special expanding symbol for as long as this feature lasts.

The character that is chosen is then marked for visibility and then, if enough instances of that symbol appear on the reels, then, once the normal lines have paid out, the symbol will expand and then all the other ones will turn into an expanding icon.

Moreover, during this round, users need two of these to be seen across the reels if it is an HP or three if it is an LP. Each time this feature is activated, another expanding character will be added and the same rules apply as above.

…users must keep in mind that every sign will extend in turn, starting primarily with the one that pays the least. What does this mean? It means that after a qualifying spin, the normal lines will pay out, and after that, the first character will expand and then pay out; finally, the lines will become normal and the second sign will extend and pay out.

Ultimately, the entire point of this is for all qualifying symbols to get the opportunity to expand. Fortunately, this feature can be re-triggered until every single character becomes an expanded sign.

Feel free to share your thoughts on this latest title from Play'n GO!