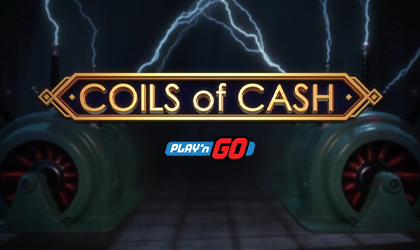 Play'n GO, a major casino operator and content aggregator continues to rule in the iGaming market with its first slot of the year, Coils of Cash. The game is the cascading slot that represents what the world after the inventions of the World's Fair in 1893 that directly shaped the world. Geniuses like Nikola Tesla, Thomas Edison, and George Westinghouse were some of the greatest known minds that changed and shaped the world forever, and they were a major inspiration for developers on this game which includes an exclusive Power Coil reel that can bring players winning up to 625x the bet.

This is an unusual design with retro and futuristic elements, where the maximum win is 30,000x the bet and this is one of the biggest payouts from the developer, which will attract a lot of punters. Wager-wise, players have a decent betting range which starts from $0.1 up to a maximum of $100. This is a high-volatility title, which means that players should bet wiser to survive in the long run, while the RTP is 94.2%.

CEO of Play’n GO, Johan Törnqvist, commented: “We have continued to go from strength to strength, giving us more opportunities to create top tier titles for our partners and extend our brand of entertainment to as many players around the world as possible. This year we will continue to produce innovative games for the industry while exploring new territories and new ways to create better gaming experiences. It’s going to be another exciting year!”

Play’n GO was launched in the 90s by Swedish developers. Since 2005, it has been working as a partner with other major software companies. It has offices in Sweden and operates under various licenses such as Malta, Gibraltar, Denmark, the UK, Alderney and Belgium. It currently has over 100 games in its portfolio and over 300 jackpots available in 30 different languages across the world. The best online casino game developer has earned its reputation not because it received recognition for its achievements, but because it pushes the boundaries of game design. This is what the brand is doing, which has established it as one of the leading operators and providers in the iGaming industry.