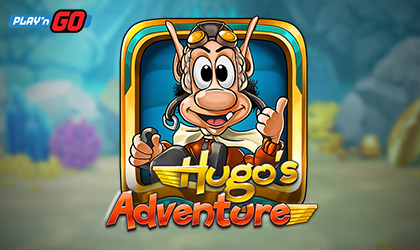 Play’n GO has revamped the popular Hugo series with the launch of Hugo’s Adventure. The latest game brings the crowd favorite character from the already legendary Danish TV show…

…and sends him on a new adventure. The supplier has created this game in cooperation with the original copyright holder, making this a fully licensed Hugo release.

Latest in the Long Series of Hugo Titles:

Play’n GO, one of the premier software providers in the iGaming industry, has rolled out another installment of their vastly popular series. This time around...

…the main character is on a new adventure, which means players can look forward to a brand-new theme as well as new and interesting features.

This particular installment is a slot oriented towards the mobile arena. Considering that the studio behind this release has a very strong mobile background, such a move comes as no surprise to anyone. The game was developed in cooperation with 5th Planet Games – the official holder of the Hugo license.

A Wealth of Fresh Features:

The title brings a number of interesting new features, with the obstacle game being the absolute highlight of the entire release.

Players are given a life and must avoid various obstacles in order to preserve that life. During this mini-game, they will be in a position to gain new lives as well. All of this puts the new release on a level that transcends a standard slot game.

Johan Törnqvist, CEO of the studio behind the title, commented on the offering as well as other content in his company’s portfolio: “Hugo is a beloved character, and whenever we create a Hugo game, we make sure we do it justice, by making the best game possible, and bringing something different from its predecessors. This newest edition is our greatest one yet, and its innovative features are going to excite both fans of the previous games and new players to the Hugo series.”

Mogens Agger, VP of 5th Planet Games, also commented on the latest release from this series: “We’re delighted with this latest Hugo release, and we think fans will be too. We had the aim of bringing Hugo to a wider audience through the casino market, and this has been realised through a remarkable partnership with Play’n GO.”

Founded in the mid-90s, Play’n GO started out as a small group of talented individuals who got together as a consulting company. During this time, the original team realized that they have a lot more to offer to the market. This marked the beginning of their journey into the iGaming industry.

Today, it is known for delivering some of the best slot titles on a variety of platforms and has offices and teams in several different locations across the world, including Hungary, Philippines, the United Kingdom, Sweden, and Malta.

On top of that, the company currently operates an innovative Omny Channel Magic API that enables the players and operators alike to exert more control over the content.