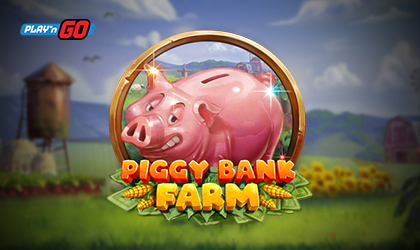 Play'n GO has released its latest game of 2020 with a simple little slot machine called Piggy Bank Farm which also marks its promise to release 52 games by 2020. From Legacy of the Dead in January to this game, it has been a great year for the company. This brand invites players to join Farmer Joe in an adventure where he planted gold and plastic coins into Piggy Bank.

Variety of Games as Key Factor for the Brand:

This title is clearly different from the adventurous theme of the recent Golden Osiris release, and exactly this variety of slots is the main reason for their successful year. Titles like Rich Wilde, Riches of Robin, Shield of Athena, Dawn of Egypt were so dominant and popular among the punters, while innovative slots such as Gold Volcano and Riddle Reels; Case of Riches and Diamond Vortex offers players different ways to entertain themselves. Also, several high-profile sequels were also released this year, such as Reactoonz 2, which had a record number of users on the launch day.

A Great Year Behind, and Better Things Ahead:

CEO Johan Törnqvist, commented on the company’s success: “We have seen ourselves progress and raise the bar year on year at Play’n GO and, while 2020 represents our most outstanding achievement to date, we’re still looking for more. We will continue to innovate, to entertain and to provide world-class services to our operating partners, as we look to cement our place as the worlds’ number one supplier. 2020 was great, 2021 will be even better.”

Play'n GO entered into the online gaming world in 1997 and has had several very popular providers to compete with, such as Microgaming, NetEnt. It has offices in Sweden and Hungary. Also, it offers different types of games and slots such as Enchanted Meadows and Dragon Ship, progressive jackpots and more. Instant games or mini games are also available, which can be adapted to different devices on major platforms. All of its games are available in over 30 languages and thanks for developers, which include the latest technology to make the games fast and user friendly.