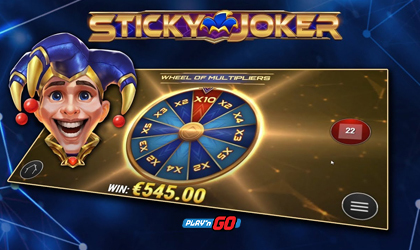 Play’n GO has announced the release of a brand-new slot that is leaning towards the classic gameplay experience.

Titled Sticky Joker, the new game is all about finding…

…the winning combination among fruits and other classic symbols. However, despite its classic appearance, the game brings several modern features.

The All New Joker Game:

The leading developer is a household name when it comes to slot games and other gaming content. This company has been around for long enough that they’ve become experts in building themed slots.

Their latest take on the classic theme features a rather abstract setup. However, unlike most such games, this one is packing awesome visuals that absolutely give the whole thing a great vibe.

As the game loads up, players will see…

…a background that is full of geometric shapes that are moving, coming in and out of existence. The reels tell a slightly less abstract story. Symbol design features fruits, stars, BAR symbols, and lucky 7s just like you’d expect from a game of this type.

A Classic Experience in a Modern Package:

The title is a 3x3 slot game that runs on 5 fixed paylines. Being a classic slot means that there aren’t many special features. However, the developer didn’t go full classic in this regard. Instead, they’ve added the sticky wild symbol that comes in the form of a Joker.

Once it lands on the reels, it will trigger a respin. During the respin, Joker wilds will stay on the reels. Landing 4 or more wilds triggers the Wheel of Multipliers feature where players can win up to 1650x the original bet.

Johan Törnqvist, CEO of Play’n GO, commented on the latest release: “Sticky Joker is an excellent game for players who are fans of Joker based games. It’s simple, straightforward and players can quickly get into the rhythm and enjoy what it has to offer. We love making immersive games with characters and backstories and plenty of features for people to experience but, sometimes people just want something simple to have fun with, at Play’n GO we cater to everyone.”

Play’n GO is one of the oldest and most popular software providers in the iGaming industry. The company was founded in 1998 and has since been at the very edge of technological development when it comes to iGaming. Over the years it has grown into an industry leader who is constantly innovating and finding new ways of offering fresh content to its players worldwide.