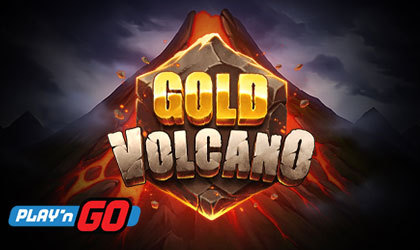 Play’n GO has announced the release of a new slot game that is bringing potentially explosive features to the reels!

…features that are integrated within the theme itself. As expected, the potential prizes are just explosive!

This latest creation is a truly interesting slot game that steps outside the usual norms of the genre. Fans of unique themes are in for a treat with a game that is all about adding a different twist to usual slot game experience.

As the game loads up, players will notice a massive field of volcanos in the distance. The whole scene looks like a landscape from an alien planet.

However, the throbbing Volcano isn’t only there…

…to give you an ominous feeling of impending doom. On the contrary, the entire theme is tightly knit into the features of the game. More on that later!

The symbols in this game come in the form of car suits and various gems. Pretty fitting for a game where the earth is spewing its contents in a massive explosion of fire.

Eruption You Actually Look Forward To:

This release is not your usual slot game. It features an 8x8 reel grid that follows the shape of the volcano.

As mentioned before, the whole base game mechanic of the game is tightly…

…related to the theme. Because of that, every time you score a win during the base game, the volcano fills up. Since the supplier went with cascading reels, a chain reaction in winning clusters can lead to a magnificent volcano eruption and potentially lucrative prizes.

One of the outcomes of the eruption is the bonus spin mode that transforms the volcano-like reels into a full 8x8 grid.

Martin Zettergren spoke, CPO at Play’n GO, commented on the new release: “As with other titles like Nyjah Huston – Skate for Gold and Rally 4 Riches, we aim not only to visit some lesser-explored themes but also to bring a new dimension to them, providing new experiences to audiences. Part of that is by creating games that tell a story not just in theme and description but also right the way through to features and gameplay. The result is exciting new titles like Gold Volcano.”

Play’n GO is one of the leading software providers in the iGaming industry. The company has been around for decades, offering quality content and pushing the outer limits of slots. So far this company has become a household name in just about every key regulated market around the world.