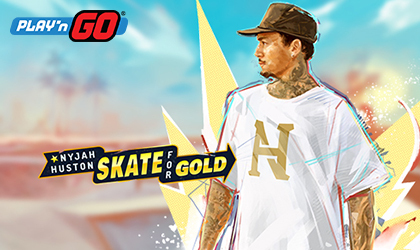 Play’n GO has announced its next release.

The game is titled Nyjah Huston: Skate for Gold and it brings several awesome…

…features as well as a unique graphic experience. Needless to say, the game is geared towards the fans of skating.

…with a whole plethora of achievements under his belt. The game comes as a celebration of Huston’s career as well as skating itself. The studio behind the new title has recognized just how popular this sport is becoming and is anticipating a spike in interest among the younger crowd.

The game itself features an awesome theme that transports players into the world of skating, to a place where everything happens – the skate park!

The team behind this release went above and beyond when it comes to dialing in the aesthetics and ensuring that the immersion is there as well.

This latest release is not your average 5x3 slot game. It runs on 10 paylines and offers several interesting features that make the game that much more interesting. Players who land the tricks symbol will trigger Wildboard RE-Spin. This mode brings 2 wilds and 1 expanding wild to the reels, while the expanding wild might turn into a Golden Wildboard wild.

If this happens, players can look forward to a 10x multiplier. Additionally, if S-K-A-T-E symbols are drawn on the reels, the lucky player can expect 12 bonus spins and more.

Johan Törnqvist, the developer’s CEO, spoke about this project: “We knew we wanted to work with the best when creating this game and Nyjah represents that. This is a theme very rarely explored in the world of slots, and it certainly hasn’t been approached from this angle before. But that’s a part of our commitment to bringing new gaming experiences to players, and new audiences to slot gaming.”

Play’n GO is one of the most popular software providers in the iGaming industry. Specialized in building high-quality slots, the company is all about delivering a benchmark for other brands in iGaming to follow. Its games are known for their high level of immersion that has allowed players to embark on all kinds of adventures. The company is driven by innovation with a dedicated team of professionals at the helm, who understand the needs of their users all over the world.