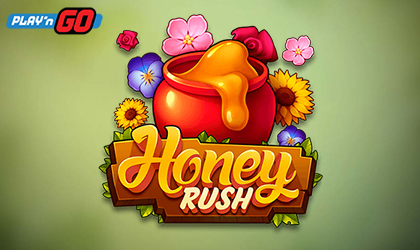 Play’n GO has added one more awesome title to its ever-growing portfolio of slot games. Titled Honey Rush, the latest game from this software…

…developer brings a great mix of innovative features and an interesting theme design. Once again, the supplier shows everyone that you can take a different path and still strike gold.

The latest game hit the shelves and it is every bit as exciting as it was anticipated. The theme of the game revolves around nature. With the action taking place deep in…

…a forest, the title comes across as rather relaxing in terms of visuals. The background theme is quite simple yet has a quality to it that gives the whole game some depth. This is mainly thanks to how the design team chose to represent the woods as well as the fact that the background is somewhat animated.

Symbol design is quite unusual, just like everything else core game-related in this release. It features various flowers, diamonds, gold coins and similar objects.

With all that said, it’s time to address the elephant in the room – the core game system.

The Sweden-based company is one of those brands that like to experiment with different core game mechanics. The one they have used in this slot release has been used before in titles such as the Viking Runecraft, Reactoonz and others.

However, this time around, things are slightly different. The whole thing revolves around the reels. This game doesn’t feature a standard 5x4 grid system but instead uses a massive hexagonal gridslot format.

There are no conventional reels and rows, but rather 37 different slots that cascade and utilize a single payline.

As far as special features go, there are numerous. Players will have the opportunity to activate the Worker Colony feature that transforms symbols around the center symbol so they match and clear out. Then, there is the Rush Meter mechanic that triggers the Rush feature when triggered and many more.

Johan Törnqvist offered his comment regarding the new release: “Honey Rush is a prime example of what we are capable of, and the type of high-quality entertainment people have come to expect from Play’n GO, and we always deliver. It has a unique shape, an engaging format, and most of all is a lot of fun to play. People are going to be enjoying this game for a very long time! But we’re still not finished with this year yet, we have more exciting titles coming between now and the close of 2019, and then we move straight into 2020, to carry on the success.”

Play’n GO is one of the largest and most successful slot game providers in the market at the moment. Its portfolio of games includes numerous critically-acclaimed titles that have proven to be proper hits in the community. Aside from rock-solid games, this brand also offers various tools that make the whole gaming experience that much better.