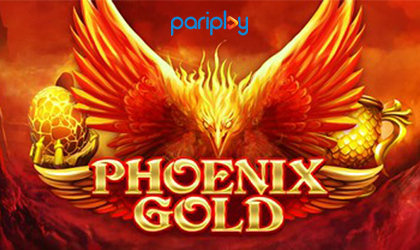 Pariplay, one of the leading software providers in the iGaming industry, has released a new game titled Phoenix Gold. Inspired by a magical bird, the new game is all about…

…giving players a new chance at potentially winning big. It does so using a solid core game paired with a number of great features.

From Ashes to Winnings:

This latest adventure is all about getting the second chance that might be just enough to potentially win big! With that said, the game offers a stunning visual experience that can easily be…

…characterized as cinematic. As the game loads up, the very first thing you’ll notice is the ominous music. It perfectly sets the tone for what is about to go down on the reels.

Per common lore, a Phoenix represents a fiery bird that rises from the ashes. The team tasked to design the visuals for this game took that core idea to heart when they came up with the theme for this slot.

The background image depicts a barren landscape full of active volcanoes and thunderstorms. Red is the dominant color just like fire is the dominant motif. One thing to note is that the…

…background is fully animated. Players can see a burning volcano in the left-hand corner, while there’s a burning disc sitting just above the reels to the right. Lastly, the ominous atmosphere is made complete by an occasional lightning strike.

Symbol and reel design is far less dramatic. Symbols depict various jewelry, books and other items in the higher paying range. The lower paying set of icons is all about…

…those all too familiar card royals.

Core Game Worthy of its Title:

Speaking of bonus spins, players can expect to gain up to 25 bonus rounds in this mode. There are also wild multipliers to be had, as well as a mystery option!

Richard Mintz, Commercial and Marketing Director, said: “In developing the graphics and game features for Phoenix Gold, we focused on integrating immersive and engaging elements, allowing players the chance to win in countless ways. Highlighting the mythological theme and story behind the phoenix, this latest addition from our game studio provides exciting multipliers and free spins options, all of which will encourage repeat play.”

Founded in 2010, the company has been working hard to establish itself as an authority when it comes to high-end slots and other gaming content. So far, it has established a presence in a variety of key markets…

…thanks to the fact that they are fully licensed by UKGC, MGA a swell as Connecticut State Government’s Gaming Division.