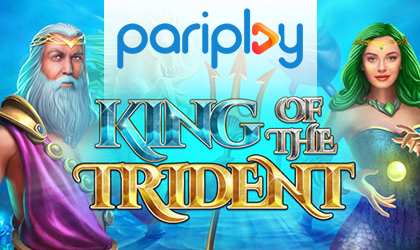 Poseidon and the mysteries of the deep oceans have fueled the imagination in men and women for ages. Long before humankind looked up towards the skies, the oceans were the last frontier. This intrigue with what lies below the big blue ocean is still going strong. Pariplay went on with the same theme for their King of the Trident slot.

The new game offers much more than just a cool setting. It is fair to say that what this studio offers here is quite unique in its own way. Fans of unconventional slots will find plenty to appreciate in this game.

The theme and the entire setting of this slot game take place at the bottom of the ocean. The studio went above and beyond to make the entire experience visually attractive. With fully animated details all over, the team behind this title has managed to give depth to the game that is oftentimes missing.

However, cool design features are just the beginning. The real innovation comes in the form of a unique base game layout. Pariplay has decided to engage their immediate competition with innovation more so than anything else. Instead of a standard layout, they went with a 3-3-3-4-4 setup. In other words, players are presented with 5 reels where the first three feature 3 rows and the remaining two have 4 rows.

One of the side effects of such a layout is the fact that it is a 972 ways to win game. Such a unique layout improves the chances for players to win, while it also adds a few interesting variables to the standard base game.

As far as special features go, the brand has opted to go with two different spin modes. Players can enjoy a classic spin mode that is triggered when three scatters appear on the reels. The Giant Respin mode is triggered when all symbols on reels 1,2 and 3 land with lit backgrounds. When that happens, those three affected reels turn into a single massive one.

Richard Mintz, Commercial and Marketing Director, offers his comment on the new game: “We have now implemented a schedule that will deliver twice-monthly game releases, including King of The Trident, which follows hot on the heels of Gold’orado. The King of the Trident game also continues our commitment to sending players on unique gameplay adventures, which in this case means diving into Poseidon’s kingdom and taking advantage of our Giant Re-Spin feature.”

King of The Trident is available at all the brand’s partnered online casinos.

Pariplay is a multinational studio that has been around since 2010. From day one, the main goal of this team has been to deliver cutting-edge technology and highly polished titles to their clients all over the world. As the company grew, so did their capabilities. Today they are among the most respected studios in the industry. Their games are often times innovative, which has allowed them to grow quite a following.