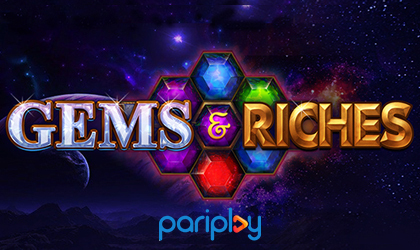 Pariplay has just announced the release of its latest online slot game titled, Gems and Riches. The new title brings players onto a shiny adventure where…

…they will collect all kinds of gems and more. All things considered, this is not your average slot game by any measure.

A Breath of Fresh Air:

Pariplay’s announcement for Gems and Riches has caused quite a bit of hype considering that this is not a standard slot game. The company is known for going outside the usual design solutions, has done it once again. Namely, there are five reels with varying sets of rows. Rows form a diamond shape in a sense that the first and fifth reel feature one row, second and fourth reel feature two rows while the third reel feature three rows.

This is a fairly volatile title with an estimated RTP of 95.98%. Despite its rather simplistic appearance, the game does come with a number of special features. More specifically, there are Wild Multipliers, Hold and Respin feature as well as the several jackpots you can win. As far as the largest prize you can win, it’s set at 500x the original bet.

One area where the game’s quirkiness really shows is the theme. Everything about this title screams vintage. The studio behind the title went with a space inspired theme that adds a note of simplicity to what appears to be a somewhat complicated game. The symbol design goes above the usual card royals and specialized characters.

Instead, they went with gems of different colors. At the end of the day, the game looks and feels like a unique package. Richard Mintz, Commercial and Marketing Director of the brand, offered a comment regarding the new release and its features: “Gems & Riches is a one of a kind video slot, inspired by a popular and successful land-based game, which Pariplay has brought to the online world for the first time. Moving away from the classic slot layout, the game will have players eager to earn tremendous rewards through its unique hexagonal design. Gems & Riches also packs distinctive features geared towards both casual gamers and real money slot enthusiasts.”

Pariplay is a software provider specialized in producing online slots for the iGaming industry. The company offers a whole spectrum of services…

With a team of highly dedicated and talented professionals, it is constantly looking to improve their offer and cover whatever needs their clients may have. Such a business ideology has allowed this company to build an impressive network of distributors which includes a number of top tier operators with an established presence in some of the most competitive markets in the world. With new titles coming out regularly, the brand is maintaining its position as a reliable software provider.