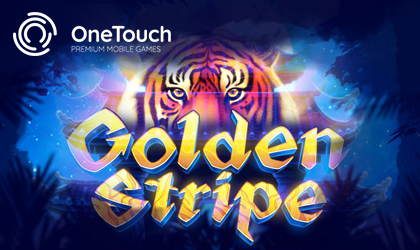 OneTouch, a slot game developer focused mainly on mobile platforms, has introduced another title to their portfolio of games – Golden Stripe.

… brings back a simpler mechanic, yet one that is every bit as exciting as any modern title.

A Throwback to The Olden Days:

The title is a classic-style slot that sports a Far East theme. Being a mobile-only game, most critics had different expectations regarding the…

…theme and graphics in general. However, OneTouch has gone above and beyond to give this game an aesthetic that includes all of the qualities often found on desktop titles.

Much like it is the case with other slot games that sport a similar theme, this one also features a dominant amount of red motifs.

As far as the core game goes, OneTouch has utilized a classic 1x3 stepper slot layout. By doing so, the studio has given this game a very nostalgic feel that will appeal to those who want a simplified yet elegant game.

The slot also features an interesting bonus game. During the course of the gameplay, players will be able to progress through various paygrades of symbols. With a total of 7 paygrades, the game appears to have plenty of depth.

Another interesting feature they have added comes in the form of the pillars spread throughout the temple. As players collect different symbols and unlock various features, they can track their progress as said symbols appear on the pillars around the grid.

Ollie Castleman, Head of Marketing at OneTouch, offered his comment on the new title: “Golden Stripe is a throwback to a classic era, offering simple-to-play mechanics while still offering the kind of quality you would expect from OneTouch. We know players will enjoy its stripped back nature and find themselves truly immersed with aptly-themed backdrops and sounds. It’s a great addition to our ever-growing content offering.”

The new game is available in all the brand’s affiliated online casinos.

Based on the Isle of Man, the company was founded in 2015 as a mobile-first slot developer. The team behind the brand has recognized a significant gap in the mobile world where the online casino market of the time didn’t yet have a presence.

This insight has allowed them to cater to an entire set of products to users who prefer mobile platforms over the desktop. The company has released its first title just one year after being founded.

Ever since then, they have released a wide range of mobile-first games that have brought them a fair amount of recognition. Some of the latest products in their portfolio include the Atlantic City Blackjack as well as a baccarat game that features their unique squeeze feature. The latter game has become one of this company’s best-known games and a complete hit in the Asian market.

Today, OneTouch is considered to be a premium developer of iGaming content in portrait mode that is constantly developing new, cutting-edge solutions for the industry.