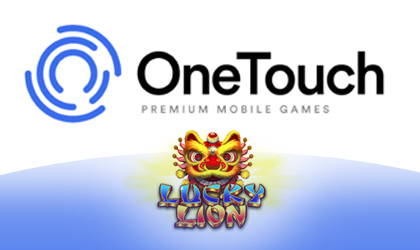 OneTouch, one of the premier mobile-fist developers, has announced the release of a new slot game titled, Lucky Lion. The first look reveals that it’s an Asian-themed slot. So far, the game is promising to be one of the more interesting releases for this year.

The game is oriented to casual players but also those who are seeking a thrill. The studio behind it did their best to deliver a premium product that is appealing in both visual and functional way.

OneTouch has gone with a very Asian theme for this slot game. The theme is full of various details such as dragons, lanterns, and others which are deeply rooted in Chinese tradition. Aside from looking pretty intense, some of these design details are thought to bring immense wealth to whoever draws them.

The background further pushes the whole traditional Chinese vibe. Once fired up, the game takes the player into a temple that is decorated with a number of authentic looking ornaments. Symbol design is similar in this regard. The studio behind the game spared no efforts into making everything look appealing.

The game looks good, but it also runs great. OneTouch did a great job with creating a game that runs smoothly no matter what.

At its core, this is a 5x3 slot that features cascading reels. In other words, the game keeps dropping symbols when the player gets a win. This, in turn, brings a chance of another win. There are also a few special features that include a free spin mode and a multiplier wheel mode. The game offers reasonable volatility and other traits that make it appealing to a wide array of players.

Ollie Castleman, Head of Marketing at OneTouch, offered his comment on the title:

“Lucky Lion is a thrilling new addition to our slot portfolio, and one of our most feature-rich slot titles to date. “With its immersive soundtrack and elegantly designed symbols, Lucky Lion will have players roaring with success, and our mobile-first technology means it can be experienced on the go, anywhere, anytime.”

The game is available as a mobile release and can be found at online casinos partnered with OneTouch.

Founded in 2015, this Isle of Man software provider has been producing premium quality games with the accent on mobile gaming. Their mobile-first approached has proven to be a good strategy as there was a gap that needed to be filled. With the first game released in 2016, it is a fairly new name in the industry.

However, they have proven to be quite a capable team, which has made them a hot commodity in the world of mobile slot games, mobile blackjack, and other mobile titles. They may not be as quick when it comes to releasing new titles, but one trait that makes it such a popular name in the industry are the standards of quality they uphold.