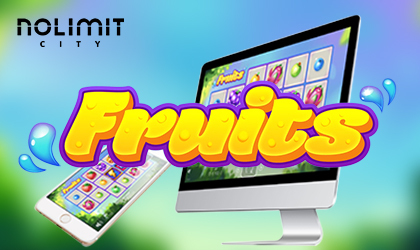 Last year was one of the best ones for Nolimit City, hence, they decided to keep up the good work and fast-paced tempo and, of course, the same level of quality. Their brand-new, simply-named slot, Fruits, is living proof of that! Let’s take a look at it!

A Different And Unique Approach:

Their previous games are an example of that, therefore, there is no doubt that this one is going to be as good as them, if not better!

Features With A TWIST!

Fruits comes with various features, that seemingly look regular, but are actually far from that!

Namely, during gameplay, you will be able to go through various interesting features for just one sitting.

It is packed with 116 fixed pay lines and a 22-33-33 reel area. It is equipped with well-executed symbols, and a multicolor, cheerful design definitely contribute to its uniqueness.

The most enticing part of this slot is the Sticky Fruit Respin feature that appears randomly during the base game.

With it, you’ll be able to witness a screen filled with delicious fruits, as well as the Mystery Wrapper feature that is not seen frequently, but once it is spotted, it is pretty rewarding!

Anything Else Worth Playing?

The answer is yes! We mustn’t forget to mention an exciting feature called Lightning Rounds, that represents a bonus round that enables you to enlarge the multiplier bet beyond 350x!

Generally speaking, this is a very amusing slot, a type of game that is going to keep you continuously entertained, especially if you’re a fan of delightful fruit icons.

For Nolimit, this is just the beginning of a productive journey. More titles will be released this year. Their main goal is to keep the same tempo and continuity and to develop at least one game every month.

Per Lindheimer, Product Owner at Nolimit City gave his opinion regarding this game and stated:

“2019 is an exciting year for us at Nolimit City and to kick it off with Fruits is the perfect start to the year. The innovative game design that allows the portrait mode to really shine, and multiple features that will keep you entertained for spin after spin will be loved by players. This is only the first of many to come during 2019.”

With Ice Ice Yeti announced this winter, who knows, maybe this one is a sign that spring is almost here!