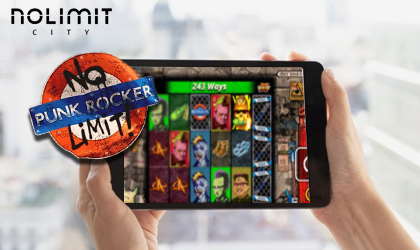 NoLimit City has taken a rebellious turn with its latest slot game release. Titled Punk Rocker xWays, the new game is all about…

…pushing the limits and bringing that fiery spirit to the reels. Players can expect to see potentially lucrative features as well as unique graphics.

London was the heart of the punk rock scene back in the ‘70s and ‘80s and has found a way to bring that atmosphere back to life with its new slot. As one would expect, the game takes place in London, in a back alley…

…near a punk rock venue. The background is full of items that can be associated with this subculture and scene. These include guitars, famous British phone booths and more.

The overall creative aspect of the game is on point to give any old punk a stroll down the memory lane. This is probably what the supplier had in mind all along!

The new title is one of the more anticipated titles of the year so far. This slot is showcasing several new features…

…including the all-new Bet Panel facelift. The brand wanted to optimize this panel to make it mobile-friendly in the future. Aside from that, players can expect to try out the trademarked xWays mechanic that has proven to be quite popular.

Per Lindheimer, Product Owner at Nolimit, said: “We hope to make games that stick out and want to get noticed for our innovative game design – this game brings this to the extreme, especially with its rowdy graphical approach that is loud and extremely up-tempo. Make sure to try out the Nolimit Bonus tool – a feature buy shortcut for you who doesn’t want to earn the Freespins through the regular grind."

Malcolm Mizzi, Commercial Director, added: “This year will be an extremely special one for us. We’ve worked tirelessly to stand out and develop state-of-the-art games and constant releases, but now it’s time for us to evolve into the next phase and prove that we’re not just about great games. The promo tool interface will house some of the industry’s most alluring player engagement tools."

…design and development of games based around a powerful engine capable of handling massive volumes of traffic. It takes great pride in….

…employing a fully dedicated team of talented professionals who understand the needs of the industry on an intimate level. So far, this provider has grown its network of partners to include several top tier operators.