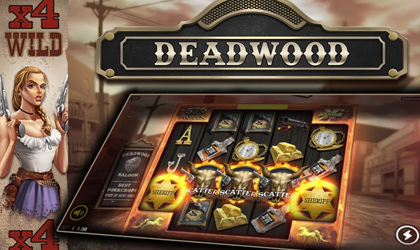 Nolimit City’s latest thriller comes in the form of a western themed slot titled Deadwood xNudge. The game is all kinds of interesting with its fun visuals and features.

…used this opportunity to once again showcase its xNudge mechanic, that has become one of the more standard features in this provider’s games.

The developer is no stranger to highly immersive slot games that draw the players in with their story, visuals and gameplay. With that said, this company has outdone itself with its latest release. Set in a small western town back when wanted dead or alive posters were a normal thing to see, this game offers an awesome audio-visual experience. The background depicts a small desert town with its saloons and stores lining up the main street.

The image is static aside from the occasional tumbleweed that goes across the screen and the clouds that slowly move across the skies. It’s arguable that the real visual treat is actually found on the reels. The reel design matches the theme and so do the symbols.

The team behind the brand has…

…done a great job defining this era through the higher paying symbols. Players can get to see double barrel shotguns, empty bottles of whiskey, gold bars and more. The lower paying set includes the good old card royals done in the western style.

One of the most surprising aspects of the game is the soundtrack. It is by far one of the best you’ll hear this year so far.

xNudge and Other Features:

The game features a 3-4-4-4-3 reel configuration using 576 ways to win. The base game is fairly exciting as it is, but this title brings an array of special features that give it even more potential! There’s the Hunter Spins triggered by landing sheriff badge symbols where each badge gives one spin. Then there’s the Gunslinger Spins, the Bonus Spin mode, the Shoot Out feature and the Hunter Wild feature with its increasing multipliers!

Per Lindheimer, Product Owner at Nolimit, said the following: “Back at it once again, one of my all-time favorite slots has been enhanced. The potential in Deadwood is just as thrilling as standing head-to-head with the Wild West’s most notorious gunslinger. This slot can explode at any time and the feature buys are incredibly exciting. Having a hard-time to aim? Bring the sawed off two-barrel shotgun to the gunfight!”

Nolimit is one of the leading software providers specialized on developing high end, immersive slot games. The company currently offers a diverse portfolio of games that are available all around the world. Its distribution network consists of many tier-one operators and is constantly growing.