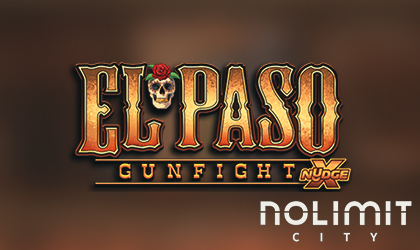 NoLimit City introduces another insane and dynamic slot from the Wild West - El Paso Gunfight xNudge. El Paso was once an especially dangerous place in Texas due to the high number of gunfights that happened there. The name El Paso comes from the Spanish El Paso el Norte, which in English means the passage to the north. The fact that this place was a passage for many prompted the city to constantly receive new visitors, both good and bad, with much alcohol involved. During this period of drunkenness, many misunderstandings arose.

This adventure will present players with a high volatility video slot that has a Maximum potential win of 44,440x the bet which is a significant improvement over previous titles. With a buy feature, the RTP can be up to 96.79%, while without a buy feature, RTP is 96.06%, while some providers can adjust that to 94.04%.

The saloon may seem a little too calm at first, but it will soon turn into a bloody room with many bonus features!

Per Lindheimer, Nolimit Product Owner, commented: “We’re no strangers to pulling out our revolvers, and it’s time again for another shootout taking place down in the infamous border town – El Paso, Texas. The xNudge mechanic is the glue of the Ol’ Wild West trinity, but this slot has really outgrown a single six-shooter – this slot holds more features than a Gatling gun holds bullets…”

More on the Leading Developer:

Nolimit City, an online casino provider, is a leading developer of slots and the company consisently meets the needs of players and casino operators. It operated from headquarters in Stockholm, Sweden, but also has offices in Malta and India. The brand has over 10 years of industry experience while it currently offers a variety of premium games. Its biggest advantage is its system platform. This platform is completely managed by the company and is available for desktop and mobile devices such as phones and tablets. With this option, it can create transparent and personalized marketing campaigns and promotions tailored to a particular casino provider.