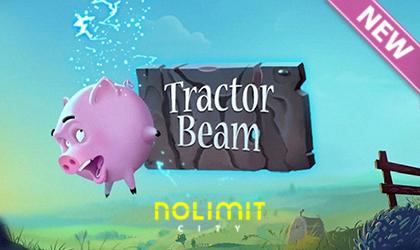 Are you ready for a close encounter of the third kind? Nolimit City takes you on an extraterrestrial ride with a bunch of little green men. Sporting one of the most unique themes on the market right now, Tractor Beam is promising to become a popular title in this quarter.

As it turns out, the somewhat whacky theme is hiding a rather serious piece of slot software. The studio behind it is well-known for its optimized games that run smoothly across multiple platforms. Chances are that Tractor Beam is going to be another such title.

Rooted in popular culture, Tractor Beam is an online slot based on the lore surrounding the unidentified flying objects and cattle disappearance cases. The theme itself is fairly subtle. They have managed to depict UFOs abducting various farm animals without turning to flashy animations or other crutches. Instead, there are only three little propulsion thrusters on each side of the frame to remind the player that something not of this earth is lurking above.

What makes this title so interesting are the reels. They depict tractor beams which pull the cows up or beam them down depending on what the player is doing. Everything is more or less animated in a cartoonish way which offers a visually engaging experience.

At its base, the title offers 20 paylines, a set of unique special features and rather volatile gameplay. This alone makes it a great choice for more experienced players who are looking for a thrill. Per Lindheimer, Product Owner at Nolimit City, stated:

“Tractor Beam had a different approach to its creation process. We started out with the game name, and from that created a game concept for both theme and math design. We’ve created a fun and vibrant slot, that personally is a highly anticipated game title with its astonishingly polished graphics and math.”

This new title is promising to further reinforce Nolimit’s already robust portfolio and give their clients a truly otherworldly experience. With games such as the legendary Tombstone slot, it has big shoes to fill.

Fans of the UFO world will appreciate special features such as ‘Clone Attack’ or the notorious ‘Beam ‘em up!’ feature. Former stacks high paying symbols the entire grid while the latter replaces all royal symbols to increase your chance for a higher paying win.

Nolimit is a company that has more than a decade’s worth of experience in the online casino industry. They offer a broad range of services and cover mobile, tablet and desktop applications. Catering to multiple platforms has allowed this company to deliver flawless integration, unique features and more thus keeping their clients engaged. The company has formed multiple partnerships over the years which has allowed this Malta-based team to release their games on various markets around the world. Known for well-made, polished titles, this studio has been recognized for their hard work and often times innovative approach to game design.