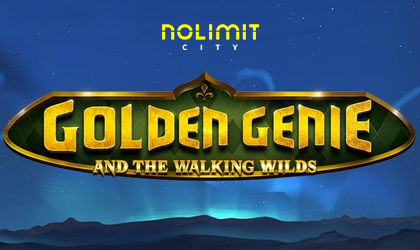 Nolimit City is continuing with awesome releases for 2020. The latest game to join their growing library of titles comes in the form of Golden Genie and The Walking Wilds.

…awesome features and great graphics, this interesting release brings plenty of entertainment value to the reels.

The Genie in the Bottle:

If you haven’t noticed already, the game is all about the…

…all-too-familiar tale of granted Wishes and Arabian Nights. Fans of the genre can look forward to an awesome looking slot that is set in the Middle Eastern desert and packed with Arabic-inspired details.

The overall theme is simple but effective enough to create immersion. As it is the case with most games with a more basic background, the actual fun visuals are found on the reels.

The team behind the brand went with the standard…

…card royals for the lower-paying tier, while the higher paying tier consists of various symbols you’d expect to run into in a game of this genre. We’re talking magic lamps, mysterious princesses and more. Of course, the genie is a massive part of the whole experience and is the wild symbol.

Last but not least, it’s worth mentioning the subtle yet quite immersive soundtrack that follows the gameplay.

This 5x3 game comes packing several interesting features meant to spice up the gameplay. There’s the Genie Wishes feature that turns the Aladdin and Lamp symbols into wilds.

…symbols get a random multiplier that ranges from x2 to x10. Next up is the Genie Lamps feature that can be randomly triggered during the base game. Players who get this feature will see reels 2 and 4 covered with an expanding Lamp wild.

Last but not least there’s the Genie Parade feature where one of three Genie wilds turns into a Golden Genie wild, bringing all kinds of multipliers.

Per Lindheimer, Product Owner for the supplier, said: “The mysterious and often told stories of Arabian Nights is now interpreted by Nolimit City in a truly remarkable setting – beautiful graphics accompanied by highly exciting and intense features with loads of potential really honors the powerful Genie of the Lamp.”

Nolimit is a well-known brand in the iGaming industry. This software provider is specialized in creating and distributing immersive slots and other gaming content. The company runs a massive distribution network that includes various tier one online casino operators from all over the world.