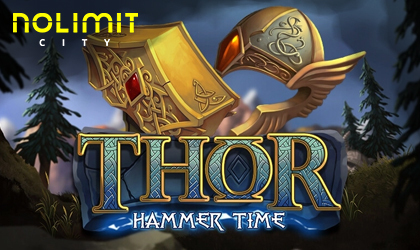 …a volatile experience wrapped in an aesthetically pleasing theme. Fans of the studio will be enjoying a familiar, high-performance base game design, only this time…

The new release is all about potentially high wins and smooth gameplay. However, one of its stronger suits is the theme. Nolimit City went with an ancient Norse aesthetic that places the reels in a mountainous region with battle banners strewn around.

The reels themselves are full of Norse runes and Nordic tribals. With that said, the theme is clean and crisp. Players will not have to worry about distractions that take away from the game itself. Symbol design utilizes a very similar dynamic.

The developer went with Norse runes for lower-paying symbols, while the higher paying ones come in the form of Nordic armor, goblets, and weapons.

Aesthetics aside, this slot runs on a very smooth core mechanic. This is a 5x3 slot with 20 fixed paylines and relatively volatile gameplay. This will…

…appease the more experienced players as well as those who are in it for the adrenaline rush. The game comes with four special features.

There’s the Asgard Spins, the Rune Raze, Hammer Time mini-game, and Thor’s Bonus. Rune Raze is triggered randomly on any spin. Once activated, all of the runes on the reels turn into one specific rune. Hammer time is another random special feature that can be triggered on any spin as well. This one…

As a result, players can expect sticky wilds, multipliers or sticky wild reels.

Per Lindheimer, Product Owner at Nolimit, offered his comment on the new release: “Being brought up in a small town with strong Viking heritage made this slot close to my heart, and to be honest, every slot provider needs a slot with a Viking theme! Thor: Hammer Time has one of the best KPI’s for big wins but also amazing KPI’s for the hit frequency for these big wins – it is a volatile game, but you’ll see the big wins hit with the force of lightning more than once – that’s for sure!”

Nolimit is an international software provider with offices in Malta, India, and Stockholm among other places. Being around for more than 10 years has given…

… this company a competitive edge and plenty of experience to tackle even the most challenging projects. Today they are one of the most popular providers in the industry with a massive portfolio of titles.