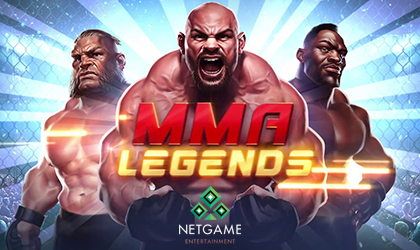 NetGame has released a true heavyweight slot titled MMA Legends. As its name implies, the new game is all about the most popular combat sport in the world.

Players and fans of MMA can expect to find a slice of that MMA arena atmosphere that we’ve all grown to love.

The new title puts players right in the thick of it. Theme wise, it is all about the Fight Night. The perspective we are presented with gives us the view of the ring from the middle of the floor audience.

…when players score a winning spin. When that happens, not only does the audience in front of you react visually, but they also react with screams and excitement!

As far as symbol design goes, there’s a lot to cover in terms of range. The creative team behind this game has gone above and beyond to put together symbols that depict legendary fighters in the higher-paying tier. The lower-paying tier comes in the form of card royals. It’s also worth mentioning that symbols expand and can cover entire reels.

Last but not least, the sound design in this game is on point. If you’re after a game that has all of the bases covered, this is definitely it.

Features Worthy of the Title:

The 5x4 slot game runs on 50 paylines. As far as special features go, players can look forward to a Bet Slip feature that tracks how many times the select fighter symbol has appeared on the reels.

As a result, the feature will pay various…

…multipliers depending on the symbol that is being tracked. Next, we have the standard Bonus Spin mode that is triggered by drawing 3 scatter symbols on the reels. Once drawn, players will get 10 bonus spins.

Overall, the game allows for a variety of prizes, bringing a generally rewarding gaming experience.

NetGame is one of the leading names in the iGaming industry. This software provider has been around since 2012 and has since built some of the best-performing games on the market. The company offers an extensive library of HTML5 slots that are packed with high-quality graphics but also innovative in-game features, base game mechanics, and more. It works with numerous leading casino operators that distribute its games in numerous key regulated markets all over the world.