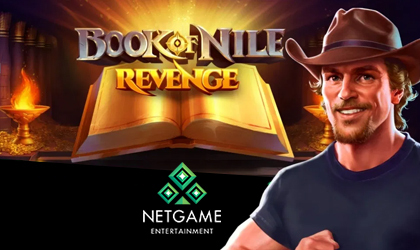 NetGame Entertainment, one of the leading iGaming casino software providers, released its latest slot product called Book of Nile: Revenge. The Nile is the life of Egypt. In the desert, the banks of the river were one of the rare fertile and productive places. The ancient Egyptians thanked their gods when the river flooded and the land became fertile. Their life was directly linked to the great river Nile.

This game takes place in the mysterious Egyptian desert on a 5x3 grid with 10 active paylines, where are a lot of great bonuses and features including great wins can be discovered, with the help of a powerful book full of ancient secrets. This is a high-volatility game packed with an RTP of 96.1%. Wager-wise players can bet from $0.1 up to a maximum of $50.

The new release has an advanced buy bonus feature that gives players a chance to multiply their winnings. When the bonus round begins, an expansion symbol is chosen from 9 potential symbols. When the extended symbol appears during the free bonus game, it extends to cover the whole reel. Players have the possibility to win up to 6327x the bet.

“Our creative ideas really flowed with the design for Book of Nile: Revenge and we’re thrilled with the results. Players will adore this Egyptian slots experience where vast riches lie for those adventurers who harness the power of the ancient book.”

NetGame Entertainment comes from Ukraine, and to be precise with offices in Kyiv. The company was established in 2009 and since then has been constantly expanding its presence in the online casino markets around the world. The company strives for excellence through innovation, joy and excitement.

The brand's main titles are mostly slots. The games have great graphics and their mechanic and math model are great as well. Their content goes beyond the usual by adding things such as interesting storylines. The brand’s lobby of games is developing where some of the popular games are Golden Skulls, Vegas Skills, Diamond Shot, Magic Dragons, Magic Tree, African King, Jungle 2.