NetEnt To Push Your Luck With Temple of Nudges 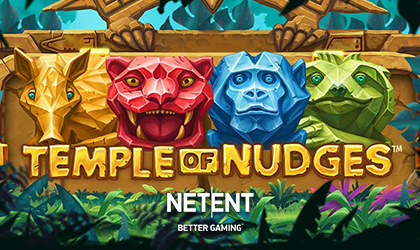 Jungle-themed video slots always provide players with an interesting story and features. The latest slot from Net Entertainment is precisely that and it offers an endless adventure filled with alluring things.

Let’s Learn More About It!

Before players embark on this journey, they first must determine coin value, bet level and then fully enter the game.

NetEnt is famous for their creativity and ability to craft sensational games that perfectly depict this type of theme.

Well-executed symbols, along with spin button and thick foliage are all part of the amazing virtual scenery.

This is a 5x3 slot machine with 243 betways. It comes with a nudge feature and a respins feature, when these two are combined they further add maximum thrill. Users will encounter sixteen characters, eight of them are ordinary while the rest represent an overlay version.

How Did They Come Up With A Name?

Some of you may think that by designing this game, they wanted to pay tribute to a witty monkey god that elbow-nudges you each time he says something funny.

Well, that’s not the case here. It refers to an entertaining feature that enlarges your winnings. Every time you stumble upon a winning combination across the reels, this interesting feature is going to be triggered.

After the win count up is over, the reels will start moving down and if a winning combination is created, it is going to be counted up one more time.

Players have to make sure that there is always a winning combination across the reels because that means that the Nudge feature is still not done yet!

The re-spin feature here is very dynamic. Namely, during it, all icons that are of the same kind as the winning character stay on the reels, while the other ones keep on re-spinning.

Furthermore, it can be triggered only if the re-spin overlay is seen on a sign during a winning game round.

Overall, this game has gotten everything one video slot is supposed to have, starting from a superb design, to spectacular video and audio effects, to, of course, extraordinary features!

In comparison to Staxx Series for instance (which is also a magnificent game) this one offers maybe a bit more when it comes to graphics, design and possibilities for great prizes!