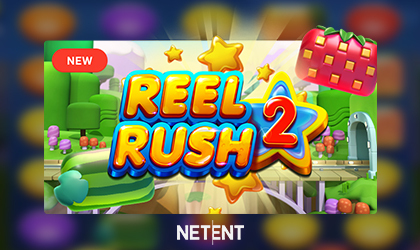 NetEnt has announced the release of a new slot game. Titled Reel Rush 2, the release represents a fresh take on a game that has proven to be…

…more than successful wherever it appeared. Fans of the original will find themselves at home with this layout, but they will also enjoy the new features.

The Return of a Legend:

The developer’s decision to revamp the Reel Rush series through a sequel has been received well, especially among those who played the original game back in 2013. With that said the main question was what does the new game offer? As far as graphics go, the supplier has stuck with flashy colors that are...

…perhaps too aggressive compared to other titles, but an actual integral part of this slot’s charm and character. The cartoonish style also takes away the complexity of design that could otherwise be too distracting for some users.

The background features a wooded area with bubbly tree tops dominating the skyline. Symbol design follows the overall concept quite nicely allowing players to easily discern between the lower and higher-paying ones. On top of all that, NetEnt has gone ahead and kept animations at a very minimum. That, however, doesn’t mean that there are none. The game runs smooth thanks to tasteful animations in all the right places.

The Fun Beneath the Cute Exterior:

Being a great looking game is not what makes this title so interesting. Namely, it is rooted in the 5x5 progressive grid that runs on 3125 ways to win. Some of the reels and rows are locked down and require a winning combo before they can be unlocked. As far as special features are concerned, the brand went with a variety of bonus spin modes including a super bonus spin mode.

The game is definitely a worthy successor to the original game and will most likely achieve the same amount of success in the following months. Bryan Upton, NetEnt Director of Games, stated: “The original Reel Rush was a frenetic experience, loaded full of madness and mayhem. Players loved it so much that we’ve turned the dial up to 11! Reel Rush 2 is a game for everyone: a top prize of 25,000 times your stake will attract savvy players, while the high-entertainment factor will appeal to casual players and video game enthusiasts. We have designed an innovative Super Token system that we believe offers players more choice and control over their Bonus experience, this is another exciting first for the industry from NetEnt.”

NetEnt is a massive software provider that is recognized as one of the few pillars of the iGaming development world. With numerous decades of experience under their belt, it has been working overtime on making smart acquisitions and expanding their reach even further.