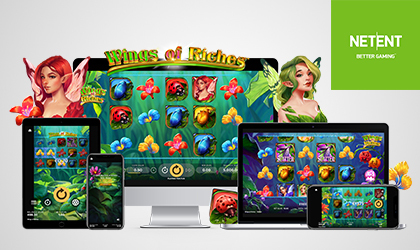 NetEnt, one of the largest slot game providers in the industry, has just announced the release of a new game titled Wings of Riches. This time around, the creative team takes…

…us to a magical walk through the forest. Players will run into all kinds of hidden riches as well as mythical creatures along the way, making this a potentially rewarding experience!

Behind the Lush Green Grass:

This latest creation takes a step away from the thrilling action-packed releases that we have been witnessing lately. The team behind this game has decided to take things slower and create what is arguably a rather relaxing experience. This slot game takes players deep into the enchanted woods where they will meet all kinds of mythical creatures, colorful flowers and more. The game…

…definitely has a calming effect but with a dose of suspense because that potentially rewarding spin might be just around the corner!

As far as visuals go, the developer worked their magic again, offering lush colors and plenty of greenery. The main characters in this story are several elves which also happen to be your higher-paying tier of symbols.

The lower paying tier consists of rare, precious insects and colorful flowers. In a way, the supplier has added its own twist on symbol design instead of resorting to the card royals as usual.

At the core of this slot game lies a fairly standard 5x3 grid with its 20 fixed paylines. The use of traditional reel setup reinforces the…

…whole relaxing theme as there’s nothing surprising about it. However, once you dig deeper you’ll find that this game does offer a few thrilling features. Namely, there is the bonus spin mode that carries a potential 5x multiplier. On top of all that, there are the expanding wilds!

With an RTP value of 96.63%, there is definitely substance to this release. Fans of traditional slot games will appreciate the pace of the game as well as its well-balanced features.

Bryan Upton, Director of Games, offered his comment on the new release: “Wings of Riches is all about the classic art style and multipliers with the spreading wilds. Using proven mechanics and an appealing theme should provide a solid performer for the core slot player all over the world.”

NetEnt is one of the largest and oldest names in the business. As a company that officially joined the market over 20 years ago, it has grown into…

…an industry leader whose authority is recognized far and wide. Today they are employing over 1000 people in various locations around the world, still delivering some of the best slot games the market has seen.

Aside from games themselves, this studio also offers a number of dedicated gaming backend solutions to their B2B customers.