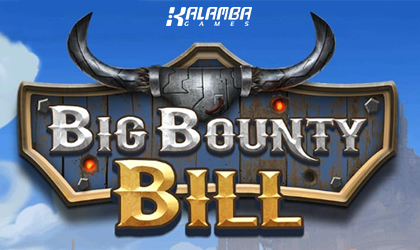 Kalamba Games has just dropped a new slot game for all of the fans of Wild West-themed slots. Titled Big Bounty Bill, the game takes players on a…

…wild journey through the badlands where all kinds of villains lurk, waiting to take a shot at Bill.

The Fastest Gun in the West:

Have you ever wondered what the Wild West would be like if it got a shot of modern technology? The studio’s latest title might give you a glimpse of that reality. Namely, it’s the kind of game that combines laser pistols and cowboys. The entire scenery of the game is full of instances where the vintage, 1800s architecture is infused with high-tech elements.

Such an unusual take on this period of the world’s history definitely gives this game a very special kind of vibe. With that said, it is worth mentioning just how much effort went into making this slot look good.

The team responsible for the visual part of the story has gone above and beyond, to say the least. This is also apparent when you look at the symbol design. The brand went with…

…standard card royals for the lower-paying deck while the higher paying set of symbols features all kinds of cowboys and cowgirls as well as their mechanical stallions. Needless to say, it’s very easy to differentiate between these highly detailed symbols.

Aside from packing some of the best visuals we’ve seen so far this year, this game also brings excitement to the reels with its unusual core game mechanics. Namely, the game starts out…

...as a standard 5x4 reel setup. However, that is where all similarities with any regular slot cease. This game runs on 16807 ways to win. Not only that but on top of the 5x4 grid sit four more rows that are…

…locked and can be activated by one of the few special features this game offers.

By doing so, players will be able to greatly increase their chances of scoring a massive win and going home with money bags of their own. Special features include the Hyper Bonus option that allows you to purchase bonus spins, the Hyper Spins feature as well as the standard bonus spin feature.

Founded in 2016, Kalamba is one of the youngest software providers in the industry. They are known for intricate slots that pack an immersive experience as well as…

…innovative features. The company has managed to establish itself as an authority of sorts thanks to an experienced team of professionals led by industry veterans.

Their attention to detail and affinity for high-quality content has made them a wanted partner for many online casino operators. Because of that, its network of distributors includes some of the biggest names in the business.