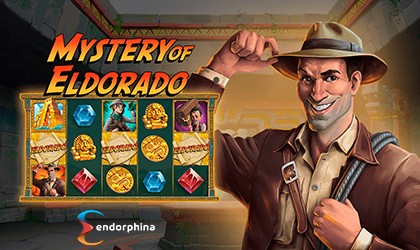 Is El Dorado real? Is there really an ancient treasure waiting somewhere in the depths of Amazon rainforests? These are just some of the questions that many have asked before, and many will ask in the future.

Endorphina’s new Mystery of Eldorado offers an insight into some of these ponderings. Fresh off the presses, this title brings promises of immersive graphics and smooth gameplay.

Intriguing Visuals Presented in the Trailer:

As a part of the release hype, the supplier has created a short teaser trailer. The video showcases hand-drawn treasure maps, ancient temples from a time when they were still shiny and new, as well as golden statues of native idols.

The brand’s marketing campaign for this slot release is already showing positive results as the news for this slot game is spreading like wildfire across the web.

The game is based on the story of Sir Raleigh – an actual 16th-century explorer - and his search for the mysterious El Dorado.

Sanctioned by Queen Elizabeth I, Raleigh’s adventures in the New World served as inspiration for numerous characters over the years.

Endorphina has modernized the character to fit current trends. They’ve done this by borrowing certain aesthetic details from another adventurer who frequently forgets his hat and occasionally runs away from massive boulders. We’ll let you figure out who that might be.

"As a kid, I was always fascinated by the story of Spanish 'Conquistadors' — the explorers of the New World. So I was delighted when our development team came up with the concept of 'Eldorado' that portrays one of the most iconic legends connected to these true adventurers, which actually inspired me to travel to the Amazon myself."

Familiar Mechanics in a New Suit:

The new title brings the standard 5-reel, 3-row base game package with 10 paylines available to the player. If the Lucky Streak series is an indicator of base game mechanics implemented in this new release, Sir. Raleigh’s adventure is expected to deliver smooth sailing all around.

To spice things up, there is a Risk bonus feature that has the potential to double player’s bet!

Based in Prague, Czech Republic, Endorphina is a software studio behind some of the most popular titles in the iGaming industry. Their releases are known for merging beautiful aesthetics and rock-solid base game mechanics. Liked by many key players in the industry, their software brand has teamed up with many reputable platforms across the web.

It is one of those studios that isn’t afraid of going above and beyond in order to bring their user base an engaging experience. This latest title is just another high-end release in what is essentially a pretty long streak of successful games.